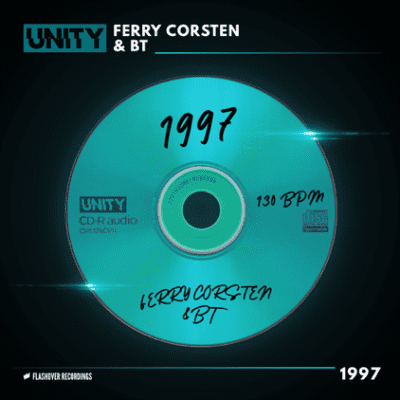 After closing out a year of UNITY releases with ‘We’re Not Going Home’ with Ilan Bluestone in December, Ferry Corsten has been busy releasing solo music for the first half of 2019, with offerings such as the uber-catchy ‘Freefall’ with NEVVE dropping shortly before Ferry returned to his Gouryella alias for the first single in two years with themuch-lauded ‘Surga’. Now Ferry picks up the UNITY project where he left off, as he drafts in another high-profile name in BT for the first UNITY release of 2019 with ‘1997’. After gracing the decks together across the world over a number of years, launching the next phase of UNITY releases with BT is a fitting way to continue the journey of UNITY, and the pairs’ experience is on display with ‘1997’, fusing both their distinctive sounds into a seamless combination of euphoric melodies.

With Ferry remixing BT’s ‘Suddenly’ in 2010, the pair are familiar with each other’sprowess in the studio, and that united vision is showcased in abundance, as the team-up sees both artists strengths utilised to their best potential to create a track that is greater than the sum of its parts. The track is highlighted by ethereal arpeggios that give the track it’s solid foundation, accompanied by luscious piano chords that sit alongside the traditional Trance elements and highlight both producers’ abilities to think outside the box. The choral atmosphere that is introduced signals the breakdown, clearing the way for a momentous main lead that continues into the drop, joined by the ripping saw wave bassline.

Ferry launched the UNITY project in 2018 with his collaboration alongside Paul Oakenfold titled ‘A Slice Of Heaven’, and continued working with artists within the Trance community throughout the year, such as DIM3NSION, Jordan Suckley, Saad Ayub and Ilan Bluestone, and after the success of 2018 has more releases in store after making his first donation to project partner, VH1’s Save The Music Foundation, an organisation launched to reinstate music programs in public schools, which to date has raised over $53 million and helped over 2,100 public schools.

‘1997’ is released via Flashover Recordings.