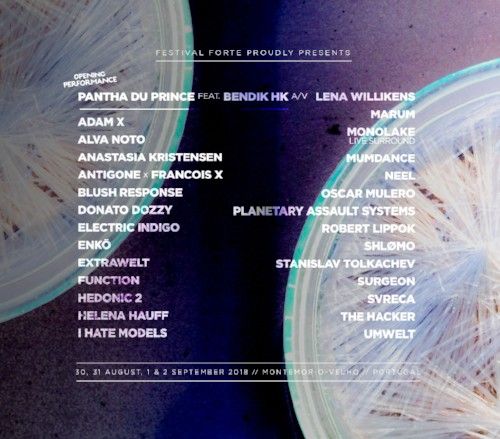 There are no words enough to describe the importance of Carsten Nicolai aka Alva Noto in the electronic music scene. Co-founder of the much respected Raster Noton label together with Olaf Bender aka Byetone and Frank Bretschneider, he is the pure example of how science can combine with art through audiovisual language. Together with Ryuichi Sakamoto, he composed the soundtrack for the acclaimed movie “The revenant” and in 2018 he released the album “Unieqav” on his new label Noton. At Festival Forte, he will be presenting his new spectacular show, which is an incredibly intense audiovisual experience that will take place inside the immersive castle walls. Robert Lippok, who will release his new album in 2018 onRaster Noton, will also present his new audiovisual show at Festival Forte.

Luke Slater will return to the castle, this time with Jaygo Bloom, who is the curator of the generative garden of the festival. Together, they will present the only Planetary Assault Systems show of the year, an exclusive audiovisual performance that will have a very special setup.

Adam X, the very important figure that built up the New York techno scene through his Sonic Groove label and the very talented french producer ShlØmo will also return to the castle as honorable members of the highest caliber.

Finally, the Portuguese Enkō and Marum complete this second round of announcements regarding the lineup of Festival Forte 2018.

Festival Forte is moving on to its 5th edition running from August 30 to September 2, 2018 in the Castle of Montemor-o-Velho, Portugal.

A new culture has been created, formed by a special audience that is dedicated and interested in the innovative proposals that the festival has to offer and which extend throughout the town of Montemor-o-Velho, the Castle, with the stage and the generative garden, the Camping site and the Esther de Carvalho Theater.

With the bar set very high, Festival Forte’s team transcends itself and embraces the challenge of making each edition more spectacular. The public expects it and deserves it. The artistic
choices stand up to this challenge and for the 2018 edition, the complex task of finding those who are at the level of the Forte's requirements is fulfilled with audacity and determination.

Generative Art continues to be a central element in the creative process of Festival Forte, which will culminate with Jaygo Bloom's installations in the castle garden and church.

The commitment to sustainability remains a concern, with the implementation of new measures that promote a greener environment, in addition to those already accomplished such as compostable loos, recyclable cups, paperless digital promotion and the cashless system that was awarded a prize in 2017 by the Ministry of the Environment, promoter of the "Sê-lo Verde" program.

We are all set for the most special edition of Festival Forte ever, which is the fruit of the contribution of all those who believe and support it, valuing an obsessive passion for art and innovation.

General Admissions are being sold in limited quantity for 100 € + commissions on online sales and for 105€ at physical points of sale.