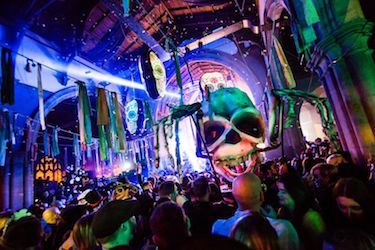 The hugely successful carnival-esque spectacle, infused with circus, theatre and clubbing, returns for its 2018 tour with mind-blowing production. New for 2018, Festival of the Dead follows one man’s journey into the underworld; a story featuring giant creatures, a whole new cast of characters and otherworldly creations, including ‘El Diablo’ – a huge, mechanical skull backdrop full of hidden surprises, acrobats, circus performers, spectacular carnival processions through the crowd and much more. With DJs spinning a killer club soundtrack, professional face painters and crowds that dress to be part of the show, there is nothing else out there like Festival of the Dead. The unmissable 2018 tour begins on 22nd September and visits Bristol, Edinburgh, Bournemouth, Glasgow, London, Birmingham, Manchester, Liverpool, Cardiff and Brighton. Tickets start at just £19 + b/f from www.festivalofthedead.co.uk.

Festival of the Dead returns for 2018 as it tours the UK with a spectacular show unlike anything you’ve ever seen before. Mixing a carnival atmosphere with circus, theatre, clubbing and mind-blowing production, Festival of the Dead follows a hugely successful debut tour in 2017 with a brand new immersive and unmissable experience. New for 2018, follow one man’s journey into the underworld; a story featuring giant creatures and creations, including The Vulture and 'El Diablo’ – a huge, mechanical skull backdrop full of hidden surprises, a whole new cast of characters and otherworldly  acrobats, circus performers, spectacular processions through the crowd, and live DJs spinning a killer club soundtrack. The crowds have become part of the show, dressed to eerily impress, with professional face painters on hand and beautifully macabre decor to enhance the atmosphere wherever you turn; there is no experience out there like Festival of the Dead. Step into the carnival of the underworld from 22nd September as Festival of the Dead visits Bristol, Edinburgh, Bournemouth, Glasgow, London, Birmingham, Manchester, Liverpool, Cardiff and Brighton. Tickets start at just £19 +b/f  from www.festivalofthedead.co.uk.

Festival of the Dead grew from a single Halloween party at The Troxy in London to an experiential clubbing phenomenon, selling over 60,000 tickets in sold out shows across the UK and in Europe last year. It’s not hard to see why; this is entertainment on a different scale. The props are awe-inspiring, the live performers dazzling and dramatic. Festival of the Dead pulls each guest into the show and takes them on a unique journey into the unknown. Brought to life with brand new characters, creations and unparalleled circus and theatrical performances, the 2018 tour tells the tale of one man’s journey into the underworld; a narrative that threads through a night of breath-taking performances, explosive carnival scenes, dancing and Halloween-tinged hedonism, all moving to the beating heart of the fiesta – the Festival Of The Dead DJs and their addictive soundtrack designed for the dance floor.

“Festival Of The Dead just keeps getting bigger and better. We’ve really pushed the boundaries once again on the level and quality of our production, with the new giant creatures, characters and live performers – you won’t believe your eyes! We’re very excited to tour the new show across the UK and take all our guests on a journey to the underworld they’re never going to forget. When we say there is no other party out there like Festival Of The Dead, we mean it."

Festival Of The Dead 2018 tour will land in ten cities around the UK and will sell out fast. The deathly fiesta returns; to experience this incredible show visit www.festivalofthedead.co.uk and prepare to navigate the underworld for the night of your life.

Festival Of The Dead events are 18+ entry.