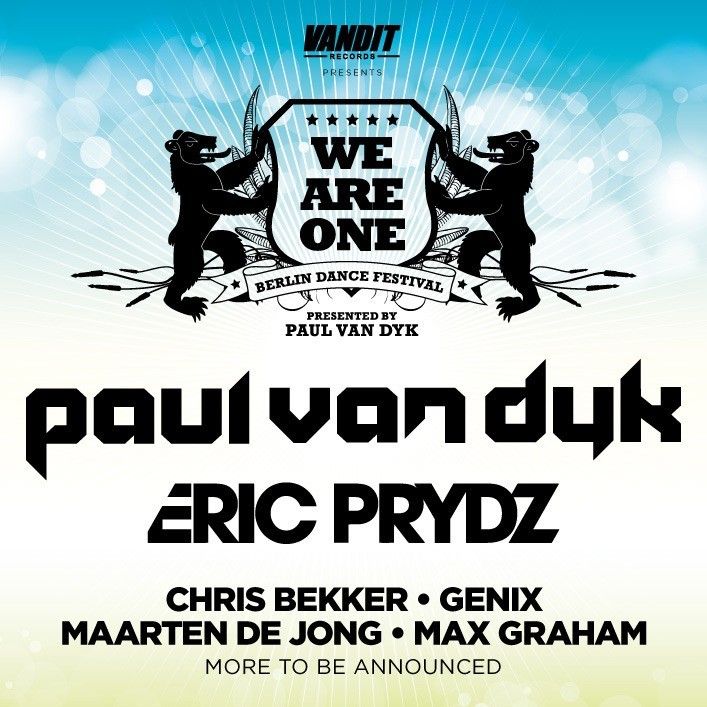 Today (16/04/2014), Paul van Dyk announced the first round of DJs joining him in the surrounds of Berlin’s famous Zitadelle Spandau for the third We Are One Festival. With exactly four months to go until the festival’s swings open its open air gates, PvD is delighted to reveal the first spinners to be attached to the event.

Receiving an unprecedented response, last year’s We Are One Festival drew a capacity crowd of electronic music lovers from all corners of Europe and far beyond. And very soon it’ll be time to do it all over again!

Among those joining van Dyk for the 2014 festival will be Swedish-born/LA-based spot-rocking-master Eric Prydz. The Pryda Records boss will be fuelling the Zitadelle Spandau crowds with his handcrafted fusion of house, techno & progressive.

Also taking the stage at the height of the Berlin summertime will be many a VANDIT Records knight, with tech-trance mavericks Genix and Maarten de Jong keeping the speakers exactly the right side of roasting! Local lad Chris Bekker will be turning on the house taps, while Canada’s Max Graham will be ensuring that W.A.O.’s progressive ante is similarly well upped!

The hottest ticket in Berlin this summer, more news on WAO 2014’s line-up is soon to follow.
Meanwhile you can secure yours through the links below: www.weareonefestival.com / www.tinyurl.com/WAOtix2014

In other PvD-related news, the electronic music legend has recently become the recipient of several new awards. Whilst Miami’s Music Week was in full swing last month, he was presented with MTV’s prestigious Chiuku award, previous recipients of which have included

Eva Longoria, Shakira, Nelly Furtado, Morrissey and others. Having already picked up Russia’s hallowed Burn DJ trophy earlier in the year, just last week, whilst on tour in South America, he was also honoured with EMPO TV’s Lifetime Achievement Award.

With a long list of awards already to his name (inc. a Grammy, numerous IDMAs, DJ Mag’s No.1 DJ & Berlin’s Cross of Merit), in recent weeks van Dyk has been the recipient of a fresh round of honours.

Having received Russia’s Burn DJ decoration early in the year, last month’s Winter Music Conference saw him presented with MTV LA’s prestigious Chiuku Award. The accolade “recognizes those in the public eye who are committed to the betterment of their communities and use their influence to become catalysts for effecting change”.

Van Dyk’s charitable and social endeavours include work with his Berlin-based Ruckenwind charity, the Akanksha Foundation in India, the FEED project and the Peace One Day movement. Presented at a rooftop

Ceremony in Miami, van Dyk said: “this award means just as much to me as any recognition I’ve received for my work in music. I want to express my appreciation to MTV Latin America. It will only serve to make my redouble my efforts in the charitable areas.”