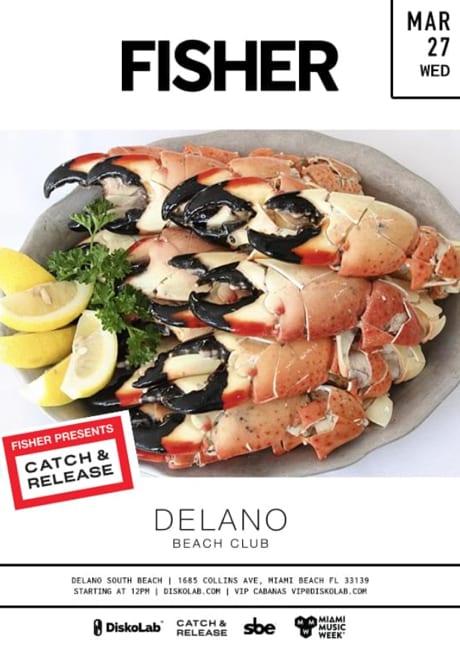 Hey Miami, there’s a rumour going round… that dance music’s most colourful character, FISHER, will be ‘Losing It’ at the Delano Beach Club on March 27th bringing his Catch & Release pool party to the people of Florida. Joined by an array of special guests, including Mason Maynard, Melé, and more TBA, the party is sure to be one of Miami Music Week’s most in-demand, and unmissable, events.

The Catch & Release party follows a truly stellar year for FISHER, who was recently nominated for a Grammy for ‘Best Dance Recording’ for his whopping hit, ‘Losing It’, the huge tech-house stormer which racked up over 45 million Spotify streams (and counting!), catapulting the Australian producer into the spotlight as a truly viral sensation.

Universally loved for his wild sense of humour and energetic DJing style,FISHER – who previously scored widespread acclaim with his productions ‘Stop It’ and ‘Ya Kidding’ on Claude vonStroke’s Dirtybird label – has since become one of music’s most in-demand names globally, performing at the likes of Coachella and Printworks London, as well as partaking in a b2b tour of North America alongside ‘I Want You’ producer, Chris Lake.

With further performances scheduled at the likes of elrow Las Vegas, Lollapalooza, Parklife, Tomorrowland, Creamfields and many more this year, the Miami Music Week event marks the start of a hectic forthcoming summer for FISHER, with with doors at the Collins Avenue venue opening at12pm. Set amid the tropical haven of the luxurious Delano South Beach; a boutique venue that balances eclectic details with grand public spaces and an elegant, chic, sense of simplicity, tickets for the party are available here.

DELANO
With its soaring lobby and subtle seductions, Delano is the hotel that changed South Beach forever. Designed by Philippe Starck, Delano South Beach is a luxury boutique hotel that balances eclectic details with grand public spaces that are playful, elegant, quietly theatrical and filled with all-night energy – proof that the new rules of chic are simplicity with a crisp, clean and modern sense of ease.

DISKOLAB
DiskoLab, a multifaceted laboratory specialized in booking, marketing, and producing electronic music events, is now in its 7th consecutive year at MMW.  DiskoLab has hosted Carl Cox, Disclosure, Claude VonStroke, Guy Gerber, Joris Voorn and many more, creating a unique bond between artists and music fans all over Florida.