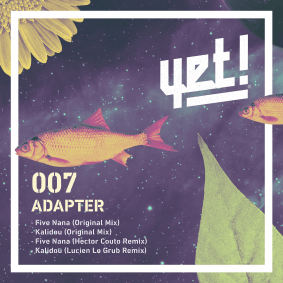 Yet! Records continue to set high standards with a sublime seventh release, this time from Adapter with remixes from Hector Couto and Lucien Le Grub.

Adapter is an Italian producer with a big tech house sound. Desolat, Get Physical and Snatch! Records have all come calling for his electrifying beats and his speedy, continued rise has been boosted with big support from the likes of Marco Carola and The Martinez Brothers. Here he cooks up a real storm with two arresting new jams.

Excellent opener ‘Five Nana’ has a big personality, with ad libbed vocal sounds and blasting bass. Withering synths and careful breakdowns all build the tension, and the rude-boy male speech that then kicks in will be sure to ignite the floor.

His other original is ‘Kalidou’, another firing track with bristling hi hats and a sense of urgency that sweeps you off your feet. Weird vocal sounds bring the party element as laser synths and fat bass all add to the explosive effect.

First to remix is Hector Couto, a solid fixture of the tech house scene who turns out club hits on greats like Moon Harbour and his own Roush imprint. His tightly coiled and vital version of ‘Five Nana’ bobbles along on clipped bass stabs and with airy drum loops sucking you in. Influential Argentine promoter and producer Lucien Le Grub then steps up with a rolling version of ‘Kalidou’ that is all about getting you into the groove and keeping you there as the hits and drums continue to pop off, much like the floor will when this one is dropped.

For some surefire dance floor dynamite, look no further than this latest from the ever excellent Yet!.