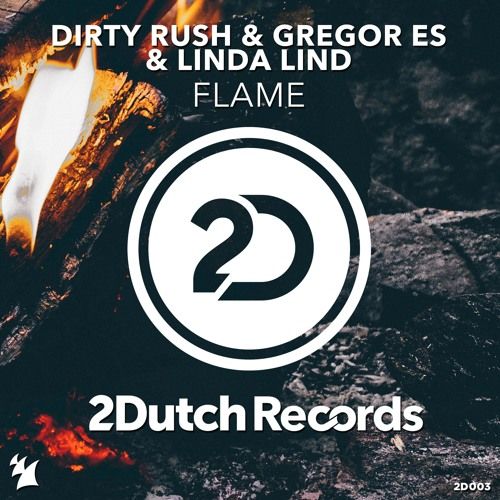 After touching down on 2-Dutch Records with previous single ‘EVRBDY’, Dirty Rush & Gregor Es got their fans aching for another belting single. Today, their wait is finally over; the Polish DJs and producers team with Swedish multitalent Linda Lind for ‘Flame’.

Once again setting the label ablaze, ‘Flame’ is a singeing smash that will light up the dance floor. The well-forged arranged is kindled by energetic synth sparks and the angelic vocals of Linda Lind, all culminating to a record that sizzles like a drop of water on the hood of a car in the hot summer sun.

Each bringing over ten years of music industry experience to the table, Dirty Rush & Gregor Es have been working together since 2010. They have performed alongside top players such as Axwell, Alesso, Chuckie, Dimitri Vegas & Like Mike, Nicky Romero, Sander van Doorn and W&W, an impressive list adorned even further with support from the likes of Afrojack, Blasterjaxx, David Guetta, Fedde Le Grand, Hardwell, Tiësto and VINAI. Now aiming for even greater success, Dirty Rush & Gregor Es come fresh from amassing over 1.5 million streams with previous single ‘EVRBDY’ and are now looking to top that with ‘Flame’.

Linda Lind is one of Sweden’s most outrageously talented rising stars to emerge in recent years. She has toured with Julio Iglesias – one of the best-selling Latin artists in the world – and amassed over 400.000 streams on Spotify with her independently released singles, some of which were also featured on the soundtracks of NBA2K17 and NBA2K18. New single ‘Flame’ is poised to add to that and will surely make the hype around her persona flare up even further.