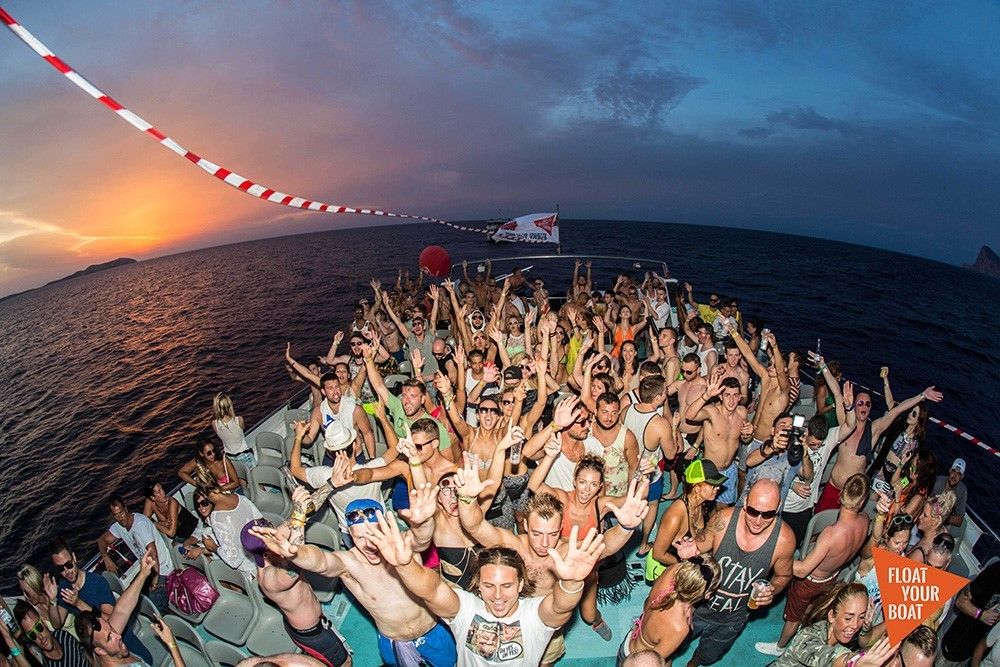 After an amazing debut season last year, FLOAT YOUR BOAT are pleased to announce they are BACK on the magical isle in 2015!

Welcome to the best boat party in IBIZA!

This year sees the FYB parties joining forces once again with one of the busiest, most talked about and successful parties in Ibiza, playing host to The Official Pre Party for

Sailing from San Antonio bay every Tuesday during the summer, the infamous boats will feature state of art, custom built Pioneer XY Pro-Audio Sound System that is must for any educated dance music fan wanting to dance, party and listen to the most credible house and techno.

Last season saw an international cast of synonymous world-class DJ talent the island has to offer with stellar guests including the main captain himself Carl Cox, Jon Rundell, Eats Everything, James Zabiela, Gorgon City, Just Be, Pan Pot to name a few…This summer expect this and many more!

Float Your Boat has fast gained a reputation for being the wildest and coolest boat party on the island!

With 4 HOURS of Ibiza at its hedonistic best, brace yourself for an amazing atmosphere, gangs of gorgeous party people and sexy Balearic beats from Ibiza resident Djs such as Jason Bye, Andy Baxter, Paul Reynolds and Clara Da Costa.

To kick things off for summer 2015, don’t miss out on your chance to join the crew and celebrate the Official Float Your Boat Opening Party taking place on the 23rd June!

June 30th sees Jon Rundell take control on deck as he heads up the Official Pre Party for Intec Digital which then grants you entry into the iconic super club Space Ibiza, where you can party your socks off all night long!

Float Your Boat parties are guaranteed to sell out so get in early and grab a pre-sale ticket NOW before they disappear!

…YOU KNOW YOU WANT TOO!

So how does it all work?

•    The boat parties in San Antonio run from 18:00 to 21:00 and leave from opposite the fountains in the middle of San Antonio at 6pm sharp (near the famous EGG)

•    The pre-cruise MEETING POINT will be San Antonio’s famous and popular Pre-Party bar PLASTIK from 16:00 onwards. Please arrive early, with your printed ticket to exchange it for a wristband by 17:00 the latest. From there, you will be walked to the boat by one of our staff. If you DO NOT redeem your ticket for a wristband by 17:00 your boat entry will not be guaranteed.

•    You MUST exchange your printed ticket for a WRISTBAND at PLASTIK. Failure to do so will result to NO ENTRY on the boat.

•    Our boats leave from the area opposite the fountains in the middle of San Antonio at 18:00 sharp.

•     The last bus to Space leaves at 22:30 from San Antonio bus station. Our FYB staff will be there

•    If you arrive too late to redeem your wristband or miss the boat – you can still gain access into Space Ibiza Club. Simply present your printed ticket at the club entrance no later than 11pm to gain entry.

•    Coming on board our boat is at your own risk. The vendor accepts no responsibility for any injuries sustained while on board, although the boat is fully insured under Spanish law , we expect responsible behavior at all times while at sea.

•    Float Your Boat is committed to promoting sensible and responsible drinking, and anyone not adhering to this will not be allowed to board the boats or receive a refund.

•    Float Your Boat reserves the right to reschedule the boat party to another time within 24 hours with no refund, if the boat company deems weather or mechanical problems make it impossible for boats to sail.

•    Failure to arrive on scheduled time will result in no entrance on the boat. This point will be strictly adhered too

•    The sale and or use of drugs is strictly prohibited under Spanish law.

Tickets available in advance at: