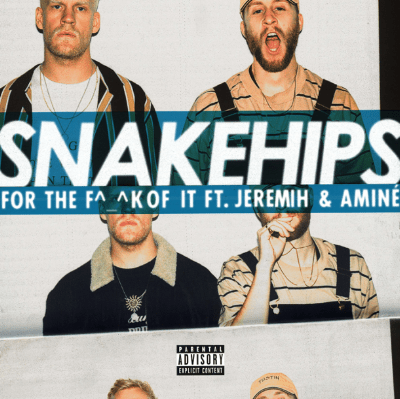 Snakehips have revealed the second track from their eagerly-anticipated 6-track ‘Stay Home Tapes’ EP. One of their hottest collaborations to date, ‘For The F^_^k Of It’ features chart-topping Def Jam signee Jeremih, as well as breakthrough rapper Aminé. The single is accompanied by the second part of the 3-part mini movie, which was released today.

Snakehips’ stripped-back rolling beats on ‘For The F^_^k Of It’ allow Jeremih and Aminé’s wordplay and flow to take centre stage. With lyrics alluding to the simple pleasure of going out and letting go ‘For The F^_^k of It’, the single is a natural progression of Snakehips’ increasingly recognised tastemaker credentials. It’s not the first time they’ve taped hot talents for their productions; the pair have previously collaborated with the likes of Anderson .Paak, Tinashe, Tory Lanez, Joey Bada$$ and MØ.

‘For The F^_^k Of It’ soundtracks the second part of the EP’s mini movie. The story is centred around a middle aged woman named Sue, and her adventures with her friend during a trippy joyride through Los Angeles, before eventually realising that the outside world is too crazy and they should have stayed home.

The ‘Stay Home Tapes’ EP is designed to be reminiscent of the more old school hip-hop sounds that originally inspired Snakehips, and serves as a nod to their day one fans.

"The EP is a bunch of tunes that we made after a crazy few years of touring and travelling the world. We called it 'Stay Home' as a kinda jokey way to express all the mad stuff you experience and the bizarre characters you meet along the way, and throughout that trying to stay true to yourself. The video goes with this idea too. It's a crazy narrative that we cooked up with director Can Evgin based on an Asian woman’s journey through some incredibly trippy shit!”

Now with James residing in the sepia setting of LA, and Ollie based in London, the duo have found sonic inspiration in both their homeland and the sun-soaked state; with the EP serving as an aural embodiment of their LA/LDN influences. The cross-Atlantic duo have recently surpassed 1 Billion streams across all platforms, proving distance has only made them stronger.

The full EP is set for release on 5th April.