For the Love of Garage NYE Special 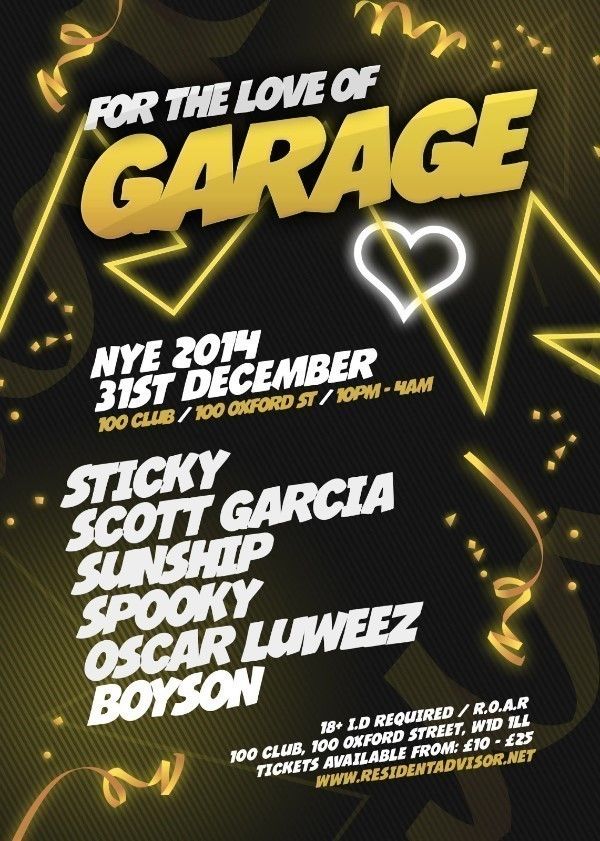 For the Love of Garage NYE Special

After 3 roadblock shows in Brixton we head north of the river for our NYE special!

We’ve called in some of our favourite UKG DJ’s to provide the soundtrack for an unforgettable NYE party. Top of the bill is the legendary Sticky, the producer behind such hits as ‘Boooo’ ft Ms Dynamite, ‘Things we do’ ft Kele Le Roc, ‘Tales of the Hood’ ft Tubby T and ‘Dollar Sign’ ft Stush. Next up is UKG pioneer Scott Garcia, the producer/DJ behind the groundbreaking hit ‘It’s a London Thing’ and one of the driving forces behind UKG’s dominance of the charts through the late 90’s and early 00’s. We’ve also got the prolific Sunship, responsible for the anthems ‘Cheque 1-2’ and ‘Try me out’ as well as a mountain of remixes that include the huge edit of ‘Flowers’

Our last 3 events have been roadblock so we strongly advise getting advance tickets to avoid disappointment.