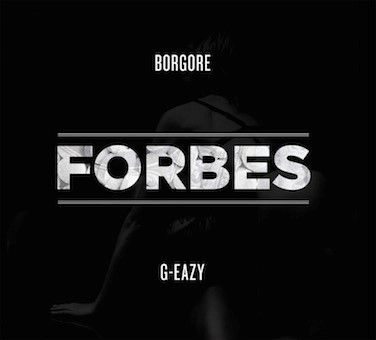 An effortlessly playful nature mixed with a supreme swagger that can only come from the most spry of collaborations, Borgore teams up with G-Eazy for the release of “Forbes,” the title track off his upcoming EP on Buygore. Co-produced by Styles & Complete, “Forbes” leads with G-Eazy’s signature slick vocals, building along a trap beat that slowly simmers before bursting to the forefront.

Through a decade-long list of accomplishments, Tel-Aviv born Asaf Borger has amassed millions of fans worldwide. Under his iconic moniker Borgore, the founder of Buygore Records has become known not only for his provocative nature, but his high-level productions. Headlining sold out shows at iconic events such as Tomorrowland, Made In America, Ultra and EDC Las Vegas, Borgore also hosts “The Buygore Show,” an internationally syndicated SiriusXM radio series that shares the name of his upcoming US Tour. Paired with #NEWGOREORDER, his first full-length album last year, and a milieu of collaborative bangers alongside fellow cohorts like Miley Cyrus, Waka Flocka Flame and Diplo, Borgore playfully moves through the realms of electro house and trap, commanding attention at every turn.

Labeled as one to watch by MTV, indie-rapper G-Eazy has slowly but steadily built his reputation for almost a decade. With a series of mixtapes, EPs and full-lengths to his name, last year saw the release of the Bay Area artists’s first major label release These Things Happen, a telling and often biographical full-length that not only brought G-Eazy out of the realms of the internet, but reached number one on various charts, as well as hitting number three on the Billboard 200. In addition to collaborating with Borgore, G-Eazy has worked with a plethora of names including A$AP Ferg, Devon Baldwin and fellow west coast rapper E-40.

Providing supporting duties this fall, LA-based duo Alex Steins and Austin Hains, otherwise known as Styles & Complete, will be joining Borgore on his upcoming tour. With music slated for release on Buygore, Styles & Complete’s vast expertise in production, along with a variety of collaborations including KStylis, Marty Baller, and Paul of Three 6 Mafia, have helped to build their reputation as producers to watch.