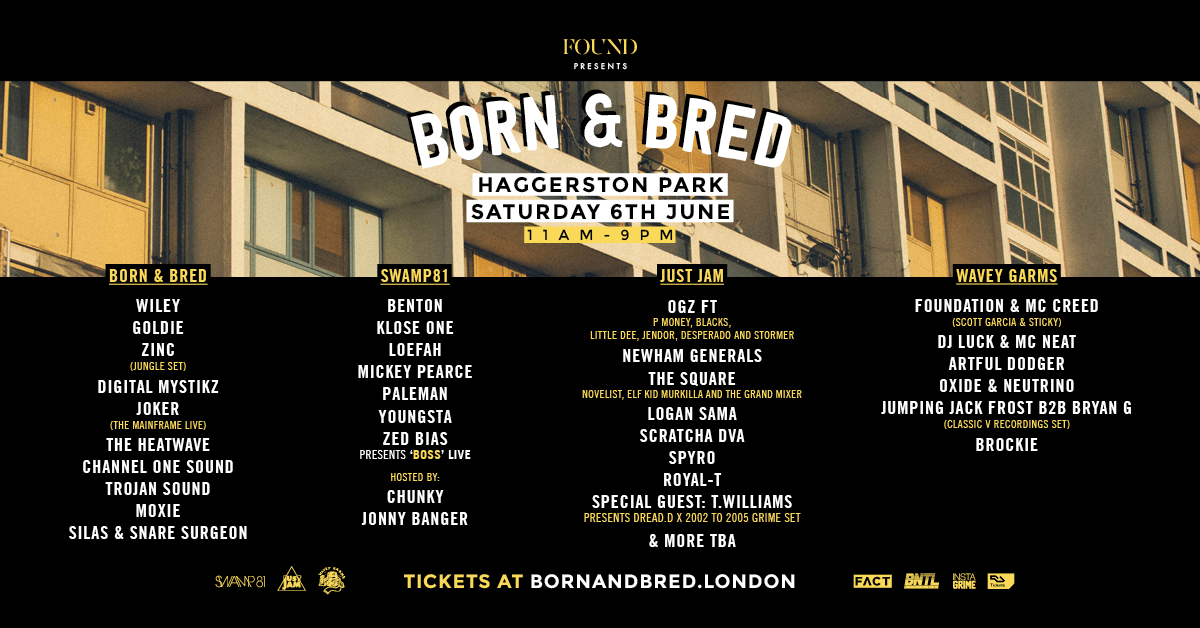 Celebrated London promoters Found are to raise their game for 2015 by announcing the first in a new Found Series of five festivals taking place throughout the summer. On Saturday 6th June in Haggerston Park, Shoreditch, Found Presents: Born & Bred will champion true London sounds forged in the Big Smoke with leading figures from across the bass spectrum including Wiley, Goldie, Zinc, Digital Mystiks, Joker, Loefah, Youngsta, DJ Luck & MC Neat, Oxide & Neutrino, Trojan Sound, Moxie, Channel One, Klose One, Paleman and many more…

Born & Bred will celebrate some of most exciting genres that have defined underground music in the city over the past twenty years. Looking to the grass-roots of music culture in the capital, the festival programme salutes a set of true pioneers in their respective scenes. The line-up hosts a set of artists responsible for representing the city we love on a global scale and unifying generations with genuinely game-changing sounds that look to both electronic and bass music culture.

Through dub to dubstep and garage to grime, UK bass culture has consistently pushed boundaries and spread its influence across the globe. Celebrating some of the finest home-grown talent, Born & Bred’s main stage will thus be headlined by Godfather of Grime, Wiley. As notorious for crossover singles like ‘Heatwave’ and ‘Wearing My Rolex’ as he is for delivering some of grime’s most iconic independent records, Wiley’s proud East London roots make him a natural choice to perform. He’ll also be joined by Metalheadz founder Goldie – an influential figure in the world of drum & bass, regarded for helping to shape the face of the genre in the UK.

Comprised of 10 members – a fluid mix of producers and emcees – Lewisham-based collective The Square represent the next generation of conscious-minded, new school grime artists and are the next to take to the JUST JAM stage. Fronted by recent XL Recordings signee and BBC Sound Of 2015 nominee Novelist, the crew can already boast a live performance at Milan Fashion Week – as well as numerous appearances on BBC 1Xtra, Rinse FM and NTS Live – since the release of debut mixtape ‘The Formula’ in 2014.

Leading grime DJs Logan Sama and Sir Spyro – as well as Rinse stalwart Scratcha DVA and Butterz’ grime-garage protégé Royal-T – will all represent the station alongside special guest T.Williams, who is to play under his grime moniker ‘Dread.D’ for a one-off 2002 – 2005 grime set.