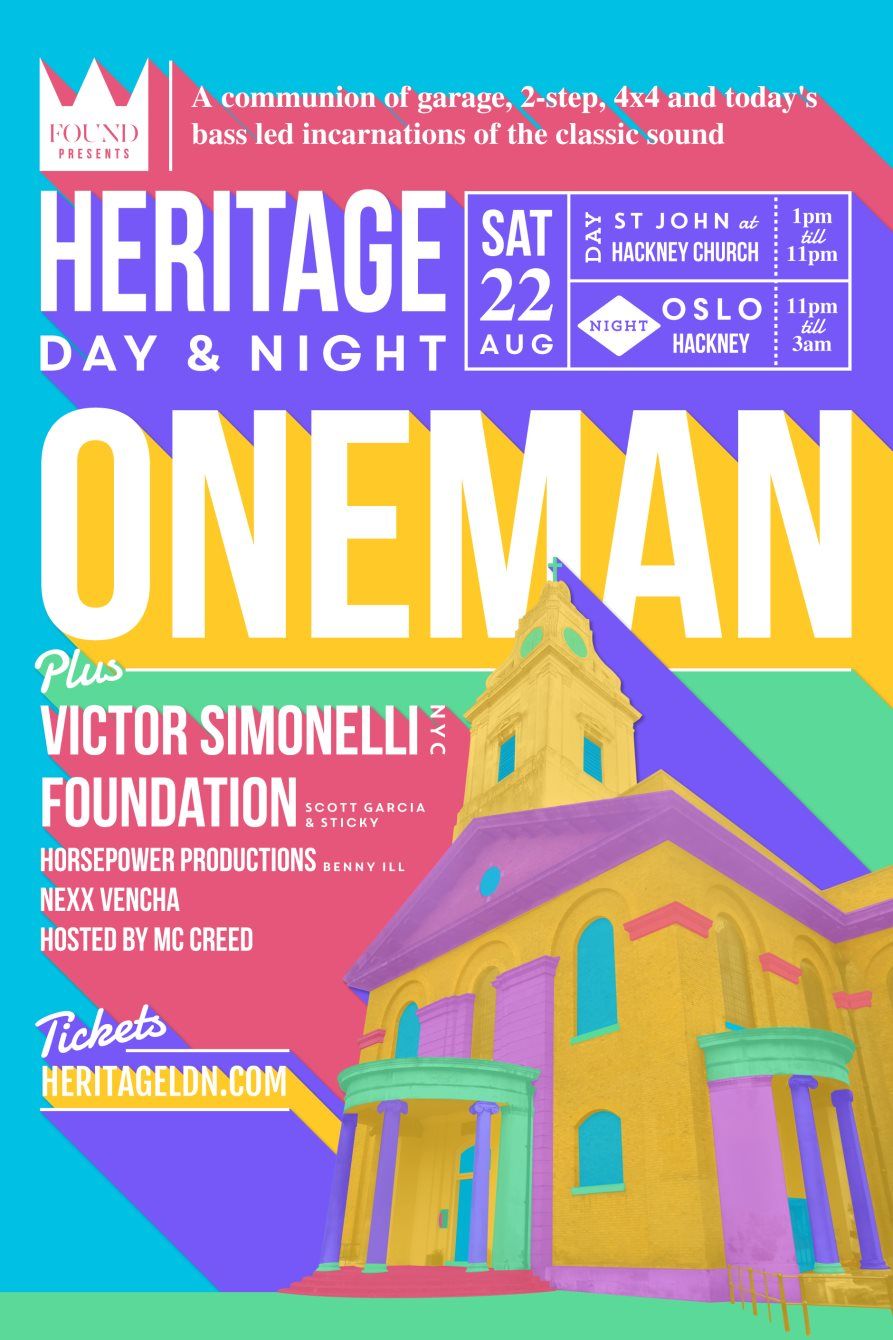 FOUND Presents the return of Heritage, an exploration of UK garage, 2-step, 4×4 and today’s bass led incarnations of the classic UKG sound.

After launching as part of the original Found Series in 2011, Heritage returns for a special day & night summer session within the stunning surroundings of St John at Hackney, a magnificent 14th century church in the heart of East London. The majestic grand hall of St John hosts daytime proceedings with a cross-generational gathering of electronic artists all paying homage to the hugely influential sound of garage. Later, the party is set to continue down the road, in the intimate surroundings of Oslo.

Headlining at St John – the sounds of London’s DJ Oneman. He’s a DJ close to many Londoner’s hearts, a true DJ’s DJ known for his seamless transitions between genres, with highly charged sets that are never lacking in style, or substance. Whether on his Rinse FM residency, in his FABRICLIVE CD compilation or during his acclaimed live show with Jackmaster, Oneman is heralded for producing epic blends that fuse UK garage with its many influences, offshoots and forerunners; chopping dubstep, hip-hop, R&B and a plethora of bass strands to create the beloved party hybrid that is the Oneman sound. At Heritage he spearheads a bill of pioneers but is set to perform as a modern master in his own right, representing the now and the future of UKG.

Hailing from the other side of the pond, Brooklyn’s Victor Simonelli is a producer, remixer and New York DJ with serious heritage, having honed his soulful house touch since the 1980s. Victor’s seminal productions of the 1990s caught the attention of the UK’s early garage pioneers, with the club staple ‘Do You Want Me’ (1998), produced under his Cloud 9 moniker, leading the way on dancefloors across the country. This and tracks like ‘Feels So Right’ would become deep house classics respected in both house and garage circles to this day. Victor Simonelli represents the uplifting, vocal sounds that would hold influence on the burgeoning pre-garage house scene before the music made its next transition on London’s underground club circuit.

Bridging the gap between Oneman’s futuristic style and Victor Simonelli’s grass roots approach are Foundation, a.k.a. Scott Garcia & Sticky. Scott Garcia is, of course, the man behind the all-time classic ‘It’s A London Thing’ whilst Sticky is the producer who launched the career of Ms Dynamite with seminal UKG smash, ‘Boo!’ Having first come together as a DJ unit in the hallowed rooms of Fabric, Scott and Sticky have honed a simultaneously upfront, nostalgic and fresh-faced approach to garage that sees the pair use an epic four deck set to showcase their heritage as two of the scene’s undisputed pioneers, for an uncompromising party vibe like no other.

Benny Ill flies the flag for Horsepower Productions, originally a collective of producers pivotal in the later development of garage and one of the most exciting period’s of the genre’s history. Known for a stripped-back approach that’s unquestionably UKG, the Horsepower sound favours a bass laden, dub-infused style prevalent in the likes of ‘Gorgon Sound’ and ‘When You Hold Me’. Through records like these, Horsepower were amongst those instrumental in the birth of the early dubstep scene.

Throughout the day this regal location will offer up a unique celebration of the garage sound, set to the backdrop of beautiful stained glass windows, outstanding acoustics and a summertime fuelled outdoor area serving-up delicious eats.

At 11pm the party continues across the road at Oslo, Hackney.