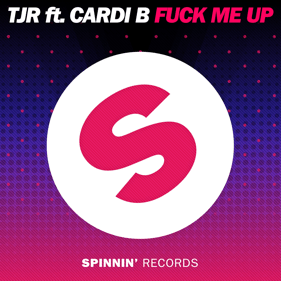 TJR is ready to party. With ‘Fuck Me Up’ he is going to bang the clubs and festivals like never before. Featuring social media star Cardi B he brings a heavy bass line, pounding beats, sharp synths and raving vocals. Dance floor madness to the max.

Born as TJ Rozdilsky, TJR has built a formidable catalogue of original tracks and remixes since exploding on the scene. He’s the consummate DJ’s DJ and its clear that the mixing skills he’s honed over his career have never been more relevant; spinning, rolling and scratching live, TJR is a sight to behold behind the decks, especially in an era of pre-programmed playlists.

‘Fuck Me Up’ is the follow up of ‘We Wanne Party’ ft. Savage, which was released in March of this year. ‘We Wanna Party’ peaked at #1 in Beatport’s Top 100 as well as its Electro House chart.

‘Fuck Me Up is already supported by Dimitri Vegas & Like Mike, Hardwell, Tiesto, David Guetta, W&W and more.