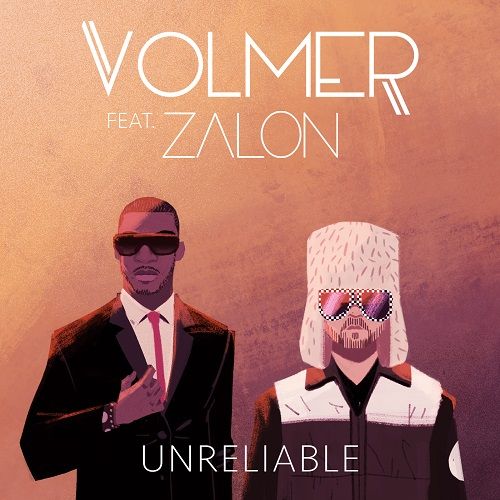 Hiding behind his sunglasses, Danish phenomenon and dance floor maverick Volmer lets his music do the talking as he prepares to release his new, bass-heavy track ‘Unreliable’. Featuring vocals from the soulful and seductive Zalon, the track will be released on 10th June via Scandinavian label disco:wax.

From working in a humble London wine shop to commanding clubs in his homeland’s DJ scene, ‘Unreliable’ signifies just how far Volmer has come in the past few years. A slow-jam electro tune that tangles together the full-bodied vigour of deep house and the smooth intricacies of soul, it’s rhythmically reminiscent of artists like Groove Armada mixed with the elegant poise of R&B heavyweights such as Frank Ocean and Usher, comprising a host of silky harmonies, punchy snares and smooth textures. Opening with a swirl of sporadic synthesisers, Volmer creates a spacious sense of atmosphere for Zalon’s fervent and tender vocals to carry the catchy melody. Inherently groovy and polished off with exquisite production techniques, the track is a readymade soul-powered floor filler.

Fresh from graduating from London’s prestigious College of Music, Volmer took a step back from playing guitar and began his career on the garage and electro scene, crossing paths with a multitude of talented artists such as Phoebe One, Ms Dynamite and Craig David. After returning to Denmark, the 32-year-old continued to work the clubbing scene, delivering hard-hitting and bass-heavy shows while gaining valuable inspiration for his own production ventures.

After receiving acclaim for the audaciously catchy ‘Bassline Business’ – his debut single on disco:wax – ‘Unreliable’ offers a welcome change of pace from the full-throttle club banger as Volmer teams up with Zalon, the MTV-approved former backing singer to late soul sensation Amy Winehouse. The collaboration gives ‘Unreliable’ a distinctly suave and poppy dimension to the Copenhagen-based producer’s otherwise irrepressibly catchy rhythms and powerful bass-lines. On working together, Volmer notes that “I’ve known Zalon for some years now. I loved the work he’s done with Amy [Winehouse] and Mark Ronson so I was really excited when he was finally up for working on some more electronic music. Even though our backgrounds are very different, we have a lot of fun in the studio…there are no limits really.” Despite running in two entirely different musical circles, both artists complement each other’s strengths, making ‘Unreliable’ all the more enjoyable because of it.

Combining the rich and succulent vocals of a seasoned soul man like Zalon with his own distinctive dance sound, Volmer has struck gold with his alluring new track ‘Unreliable’, making him one of the most exceptionally talented producers to emerge from Scandinavia in recent years.