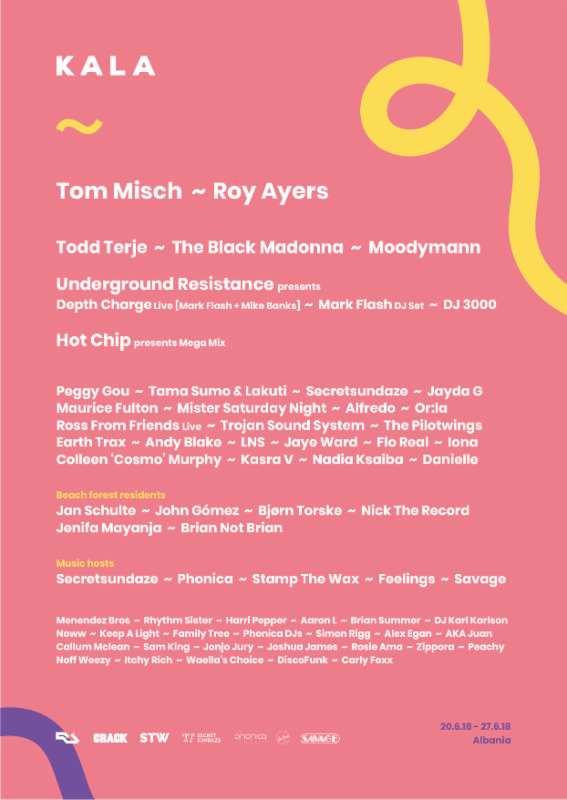 A legend in the truest sense, Roy Ayers has been at the forefront of jazz, funk and soul for nearly 70 years. Acknowledged as the godfather of neo-soul, Ayers musical journey has seen him move from jazz to funk to R&B to disco to afrobeat to hip hop and even house. Over the years, he has worked and played with an eye-watering list of artists, including Miles Davis, Herbie Hancock and Fela Kuti, and has become one of the most sampled artists in history – snippets of his music have been used by the likes of Madlib, Kanye West and Mary J Blige.

Dubbed The King of Summer Jams, Norwegian DJ, producer, and remixologist Todd Terje will ignite Kala's dancefloors beneath the star-studded skies with his sun-drenched disco, whilst The Black Madonna's fun-filled, eclectic sets make the perfect fit for Kala's carefree ethos.

Kala's unique, naturally stunning setting on the backdrop of the unexplored Albanian riviera is one of Europe's best kept secrets. Visitors can lose themselves exploring the paradisiacal surroundings of sandy beaches and crystal clear waters, with unrestricted access to the beach caves, natural canyons and hiking trails that snake around the amazing site. Besides the week-long music schedule, Kala adds further to the adventure with a carefully selected food program ranging from beach BBQs to slow food pop up restaurants, a soon-to-be-revealed roster of wellness activities, and day-trips to explore Southern Albania's natural wonders, such as Blue Eye, Grama Bay, Ksamil and Porto Palermo.

With artists encouraged to play longer sets, open-air parties until sunrise, an intriguing weekend-long Beach Forest Residents Party hosted by esteemed selectors Jan Schulte, John Gomez, Bjørn Torske, Jenifa Mayanja, Nick The Record, and Brian Not Brian, immersive art installations, and a myriad of surprises hidden in the nooks and crannies of its fabric, Kala's intimate world is shaping up as truly unique.

From exotic beach huts to luxury hotels overlooking the Ionian Sea, Kala sets itself apart offering premium accommodation at accessible prices to accommodate their 2000 strong community. Tickets for Kala start from just £245 and include full week hotel accommodation, transfers and full festival access. Party-goers will fly into Corfu, where low-cost flights are available. From Corfu, a specially chartered boat will take passengers to the festival site, only a couple cocktails away. Expect good music, good drinks and good vibes while you cruise up the Albanian Riviera.

With so much on offer, Kala reaches beyond a traditional festival experience, providing a week-long adventure to discover some of the best kept secrets in the Mediterranean, whilst delivering an impeccable lineup rarely experienced at such intimate events.

Tickets to Kala start at just £245 and include festival access, accommodation and transfers from Corfu. All tickets available at: http://kala.al