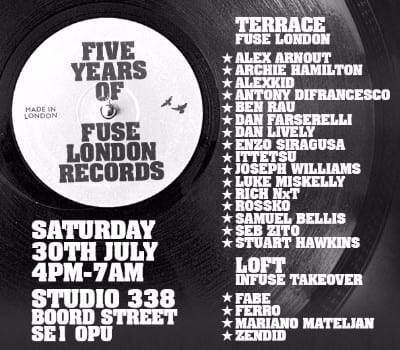 For anyone that has ever been to a FUSE event you will see that their core philosophy is simple: to stand out from the crowd by hosting exceptionally high-quality raves, emblematic of superior-technical standards of sound design, and a close-knit core of residents.

FUSE already has a well-established history starting life in 2008 quickly taking Sunday clubbing to another level. Beginning in East London then over time building to become a well-respected and recognized event across the clubbing capitals of the world – the team melding a youthful exuberance with time-served maturity.

Over the past few years FUSE has enjoyed unprecedented success attributed to its core residents that set the tone at every event which include Enzo Siragusa, Seb Zito, Rich NxT, Rossko.

In 2011 FUSE established FUSE London Recordings. A label headed up by Enzo Siragusa which collected together the talents of the emerging artist around him to produce a label with an outstanding and unique dubby sound. With tracks like 'Sagamore' by Enzo Siragusa and 'Kilimanjaro' with Alex Kidd setting the standards for the label, as well as Seb Zito's 'Flat 1', and Archie Hamilton's 'Works On Sunday' all hitting the mark.

'The label started as a platform for our London based artists who were making a deeper dubby sound specifically for Fuse. The label and sound has evolved with the parties and the artists’. ‘We have grown and cultured our sound touring the world and experiencing different crowds, dancefloors and sound systems, bringing it all back to the studio in London and to FUSE London Recordings’. – Enzo Siragusa

This label is now celebrating its 5th anniversary with the first ever Fuse event at the newly refurbished Studio 338 in London, this is FUSE’s only major London event this summer.

They have promised to showcase a rare line up of the majority of label contributors from the first 5 years of FUSE London Recordings – exploring the collision of London obsession with new electronic talent with the hopeful ecstasies of the rave generation.

Sister label Infuse will be taking over the loft hosting a specially curated room featuring Infuse artists from past, present and future.

Fuse and their FUSE London Recordings imprint are growing to becoming major players in the club world, this year sees them joining forces with the respected HYTE at Amnesia in Ibiza as well as a confirmed date at Benimussa Park on July 27th.