Irish future-soul five-piece Shookrah have shared the video for their new single ‘Notions’ which garnered immediate support from Surviving The Golden Age and Nialler9. The track, premiered by Variance instantly racked up support from RTÉ 2FM’, and is a precursor to their upcoming self-titled album Shookrah, set to drop on 25 October. Shookrah were named Best Act of 2017 and 50 People to Watch in 2018 by The Irish Times. They have seen substantial press support from the likes of The Irish Examiner, AFROPUNK, Wonderland Magazine, Clash Magazine, Music Week, District Magazine, Nialler9 and Made in Shoreditch Magazine. Shookrah have received airplay from BBC’s Radio Ulster, and their track ‘Gerascophobia’ was named BBC Ulster’s Across The Line track of the day. Racking up nearly 300K streams on digital platforms they shared the stage with Billy Ocean on his Irish tour and have played Body & Soul Festival, Electric Picnic, Wigwam, Quarter Block Party, Other Voices Music Trail, and Knockanstockan Festival.

Shookrah is Senita Appiakorang (lead vocals), Emmet O’Riabhaigh (drums), Daniel Coughlan (guitar), Diarmait Mac Carthaigh (keyboard) and Brian Dunlea (bass guitar). Each of them hails from a musical background in their own right, and the band is truly a melting pot of talent with each member bringing their own distinctive piquancy. Based in Cork, Munster, the band has gone from strength to strength and Shookrah are positioning themselves as important pioneers in the blossoming urban music scene since their 2013 inception.

Serving fresh helpings of synth-grooves, interruptive hooks and dystopian romance-themed songs their sound sits somewhere between neo-soul and the emerging schools of R&B/Soul that define themselves as ‘Future Soul’. Influences include the likes of Hiatus, Kaiyote, Anderson Paak and The Internet, with a sound that can be likened to that of Solange meets Flying Lotus and Thundercat.

Directed by their own Emmet O’Riabhaigh, the video is truly a perfect fit. The track itself is centred around the time we waste staying in dysfunctional relationships. “It’s a recognition of faults committed to the other and yourself in seeking out traits other than those presented to you, which disqualifies the question of who was right or wrong and bares the reality of how hollow we become when we want something so bad that a tarnished version of it will do” says Senita. Fittingly the video features Senita sitting alongside herself in a plush nightclub setting, both “characters” cathartically exploring these emotions through the track.

She explains further: “The song is a reflection and address to a past lover. It felt appropriate to play my double, and kind of centre the sentiment of the song on the delusions we all create for ourselves in fractured relationships, that allow us to prolong its dysfunction.”

Director Emmet O’Riabhaigh gives some insight: “We wanted to shoot something really simple and still with nice moody lighting so we decided to go with two Senitas in what looks like a lovers’ tiff. We shot it over the course of a day in the Bodega bar in Cork, and had Senita’s sister Yesunia to stand in for some of the shots, with the whole band helping out on the set.” 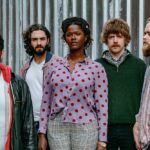