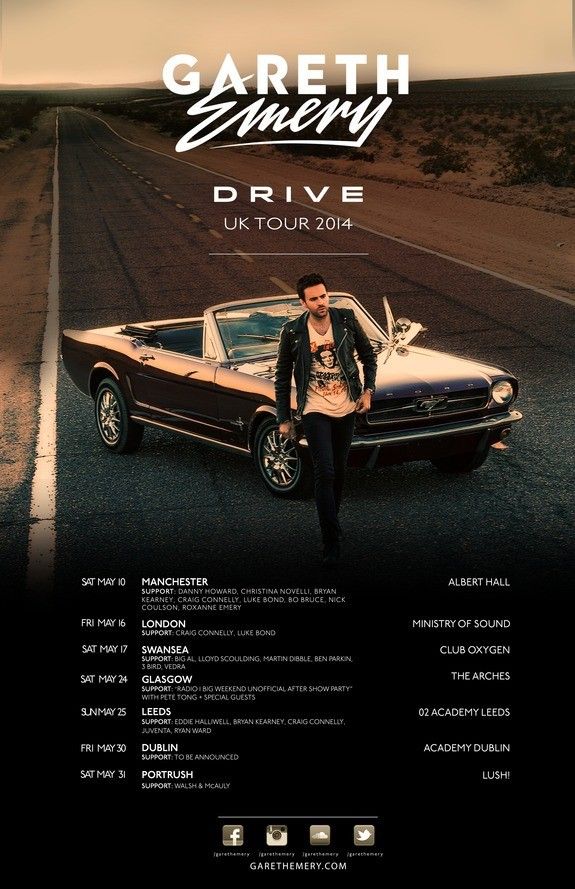 Having topped the US iTunes dance chart earlier this year with his stunning ‘Drive’ LP, British DJ legend and producer maestro, Gareth Emery is returning to UK shores this coming May to debut the new material to his home crowd.

With seven dates scheduled across England, Scotland, Wales, Ireland and Northern Ireland, Gareth will be bringing his high-octane sets to some of the UK & Ireland’s biggest venues such as Manchester’s Albert Hall, London’s Ministry of Sound, Glasgow’s Arches and Dublin’s Academy to name but a few.

Having blown the roofs off of the likes of Coachella, Ultra Music Festival and Stereosonic already this year, and with the European festival season right around the corner, 2014 looks set to be Emery’s most prolific year to date.

With the Drive LP showcasing Gareth’s ability to switch up production styles effortlessly, Emery will be surprising fans over the course of the tour, with live guest performances from the likes of Bo Bruce, Christina Novelli and sister, Roxanne Emery – most notably at Manchester’s Albert Hall on May 10 where all three will be making special live appearances!

Catch Gareth Emery on tour throughout the UK & Ireland at the following dates: