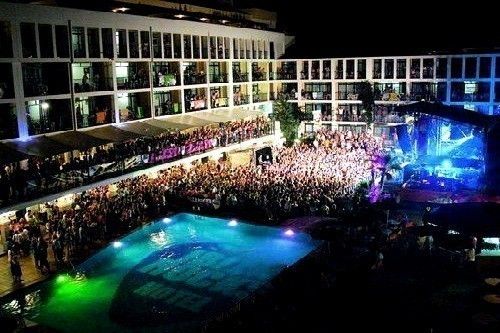 For the third year running, W.A.R! will welcome an incredible mix of the most influential and exciting names in electronic music to the famous outdoor stage at the Rocks Hotels.  The first wave of talent sets the bar high for what will be a diverse line up for 16 weeks throughout summer, starting with the man that helped shape the concept and put W.A.R! on the map, mister Zane Lowe.

Zane will play multiple shows throughout the summer and joining the UK’s master of new music for an Opening Party to remember will be rising stars and Rocks favourites Gorgon City.  Releasing on Black Butter Records, their polished, powerful and party-minded sound has already caught the ears of tastemakers across the globe and with their smash single ‘Ready For Your Love’ set to top the charts this weekend, Gorgon City will stamp their mark all over 2014. Their debut album is well underway for a summer release and fans can catch their very special show at W.A.R! before these boys blow up worldwide.

Joining the opening party line up is another of the UK’s premier rising talents Javeon. Fusing R&B, dance and pop styles in his own tracks including debut single ‘Give it Up’ and collaborating with the likes of MNEK and Julio Bashmore, big things lie ahead for Javeon.

Week two will see DJ, remixer and producer extraordinaire Redlight take to the poolside stage.  Counting the likes of Skream, Toddla T, Jack Beats, Goldie, Carl Cox, Pete Tong and Annie Mac among his fans, Redlight has mastered the very fine art of crossing over into the mainstream with huge hits including ‘Lost in Your Love’ and ‘Get Out My Head’ whilst retaining his roots and credibility within the underground electronic scene, hosting his own show on Rinse FM and releasing vinyl-only, rhythm-driven dance music by himself and close contemporaries on his own label Lobster Boy.

Joining Redlight for these massive shows is a true legend of the UK dance music scene, DJ EZ.  From his huge ‘Pure Garage’ compilations to his pioneering show on Kiss FM (just celebrating its 14th anniversary) DJ EZ is a true trailblazer of an original UK sound.  His knock out set for Boiler Room in 2012 was a seminal moment in Garage music history and reaffirmed his achievements of the past as well as confirming the sounds relevance in the current UK dance music scene.

Back in Ibiza by popular demand is another original talent, the UK’s very own Ms Dynamite.  Following a stunning set at W.A.R! last year and a new EP featuring her infectious Drum & Bass and reggae fused track with Shy FX ‘Cloud 9’, Ms Dynamite has gone back to her roots and is paving the way for a new era of retro-futuristic reggae. Fans can expect fresh material as well as all the huge hits that made Ms Dynamite one of the most influential, successful and award winning British solo artists of the last decade.

Having provided many of the standout moments of the summer during their residency at the Rocks Hotels last year, W.A.R! will proudly welcome back Example & DJ Wire for six incredible high-energy shows across the islands. As a long-standing friend and performer of Rocks, Example was key in launching W.A.R! in 2012 and his shows with DJ Wire have since upped the energy and the ante, making the Rocks stage a home from home under the sweet Balearic stars. With massive anthems and fresh new music including his single ‘Kids’, which has seen Zed Bias jumping on the remix, this will be one of the sets of the summer.

With a strong focus on supporting big headline acts as well as the best up and coming talent, W.A.R! will once again showcase a whole host of fresh new talent this summer, with many more acts to be announced soon.

W.A.R! – EVERY FRIDAY AT IBIZA ROCKS HOTEL – CONFIRMED SO FAR:

W.A.R! – EVERY THURSDAY AT MALLORCA ROCKS – CONFIRMED SO FAR: