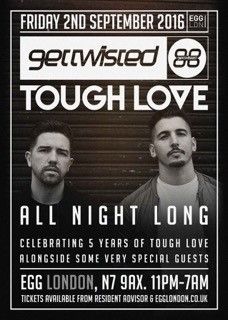 "In our fifth year celebrations we will take you on our journey with tracks that have influenced our sound showcasing whats been done and whats to come. Not just from ourselves but from the many amazing acts signed to the label. We’d like to thank everyone who has helped us, supported us and joined us in our journey so far, here’s to the next five years”

From headlining festivals and to massive shows in Ibiza to their weekly Kiss FM radio show, Tough Love’s 5th Anniversary sees them at the top of their game, constantly evolving and firing out new music from their Get Twisted label.

Stef & Alex’s ’common love for what was more than just a sound but a way of living, a lifestyle, bringing people together for a good time’ initially brought them together. Bringing uniqueness, energy and fun to every performance Tough Love developed a loyal following from the offset. Early releases such as "Cold Blood" & "Everything Hurts" picked up huge support from the likes of Solomun and DJ Sneak. Releases on labels such as Nervous, Bunny Tiger, OFF & Suara, cemented their name in clubland whilst support on national radio came from regular plays from Kiss, Capital & Radio 1 favourites such as Annie Mac, Pete Tong and Danny Howard

They formed Twisted Disco, a London based event that hosted the likes of Citizen, Kolombo, Sharam Jey, Denney, Climbers  and Get Twisted Records launched in 2012 with a monster VA with tracks from Hannah Wants, Chris Lorenzo, Denney, Lee Webster & Tough Love. The guys passionate & hands-on approach attracted releases from legends such as Roger Sanchez, Todd Terry, Sandy Rivera as well as up and coming stars such as LiTek, Midnight City, Blaise & many more. The label has gone on to release over 60 records and recently became a division of Sony Columbia.

2016 has been a year of change as the fourth TL major single with Island Records is on the way, plenty of club releases & collaborative efforts still to come and a heavy touring schedule including a highly anticipated US tour kicking off in October.