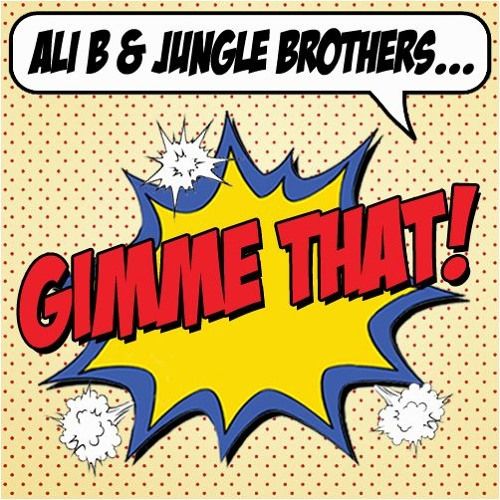 British DJ/producer Ali B and US hip hop legends Jungle Brothers, come together on ‘Gimme That’, a prime slab of transatlantic hip hop forthcoming on A-Skillz’ Jam City label.

The three-track single features ‘Gimme That’ alongside two remixes; one from label boss A-Skillz and this from hotly tipped d&b producer, Halflight.

Having been long-time friends since Ali B interviewed Mike G and Bam on his Capital show in the early noughties, Ali remixed Mr On vs Jungle Brothers’ ‘Breathe Don’t Stop’ (a Top 30 UK hit in 2004), before the three first collaborated on ‘Beats On A String’, released on Ali’s celebrated Air Recordings imprint. (“Definitely block rockin’ stuff”- RESIDENT ADVISOR).

Since the late 1980s, Jungle Brothers have been a defining force in US and global hip hop. Jungle Brothers were founding members of the Native Tongues collective, alongside De La Soul and A Tribe Called Quest; and were the first hip hop group to use a house producer with the now legendary cut, ‘I‘ll House You’.

Jungle Brothers have released 8 artist albums over the course of their career, one ‘greatest hits’ compilation, and over 20 singles. The trio (including DJ Sammy B) enjoy a hugely successful live career and completed their ‘Living Legends Tour Part 2’ in autumn 2015, which saw shows at Bestival, Boomtown, Jazz Café, Shambala, Manchester Academy, and many more.

Ali B’s eclectic and varied music industry background spans over two decades. After making his mark at the legendary Blue Note club in the mid nineties, he went on to become the resident DJ for Fabric for over a decade, releasing one of the first albums in their mix series. In the early noughties he hosted a weekly radio show on Capital FM for five years followed by five years on Kiss FM, alongside numerous appearances on BBC 6 Music.

As a producer, Ali B's released a range of remixes and original productions. Widely regarded as the DJs DJ, he’s as comfortable at the controls of clubs such as Fabric playing a heady mix of cutting edge bass and beats as he is digging for 45’s to play one of his exclusive party sets. You can catch Ali B DJing regularly in London at The Brixton Blues Kitchen, Paradise by Way Of Kensal Green and The South London Soul Train at The Bussey Building in Peckham.