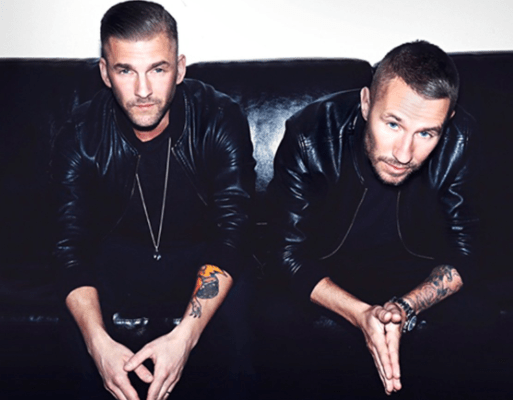 The music video for Galantis and ROZES’ collaborative new single, “Girls on Boys,” debuted at a YouTube live stream event in New York City. Since its debut the video has garnered over 43K views.

To celebrate release week, Galantis teamed up with Postmates for a sold out show in San Francisco, which marks the first time Postmates has ever teamed up with an artist for a live performance. The group also celebrated their official album release party at Marquee in New York City.

In addition, the song “No Money” is now the duo’s biggest to date—Platinum-certified with 600 million streams globally, 288 million YouTube views and iTunes Top 10 placement in 43 countries.

While their 2014 debut album, The Pharmacy, was recorded in a secluded studio in the Stockholm archipelago, The Aviary came together in a constant touring climate. For Galantis, the key to their artistry’s evolution occurred while embracing change. Christian Karlsson points to an epiphany he had while visiting an actual aviary in Hong Kong that helped inspire the new album’s namesake.

Galantis have confirmed The Aviary Tour with U.S. dates throughout the fall. Stops include the Greek Theatre in Los Angeles, Aragon Ballroom in Chicago, and Stubb’s in Austin, with more shows to be announced soon. See below for full details.

Galantis is the Swedish production duo, Christian Karlsson (also of Bloodshy & Avant and Miike Snow) and Linus Eklöw (Style of Eye). The Pharmacy reached No. 1 on the Billboard Dance Chart and spawned hit singles “Peanut Butter Jelly” and “Runaway (U&I),” the latter of which is RIAA certified gold in 7 countries and earned Grammy nominations for “Best Dance Recording” and “Best Remixed Recording” via the Kaskade remix. They’ve performed at world-renowned events such as Ultra Music Festival, Electric Daisy Carnival, Coachella, Tomorrowland, Electric Zoo and Creamfields among many others.