Glitterbox Back At Space Ibiza For 2016 Season with Basement Jaxx, Dimitri From Paris, Todd Terry + more 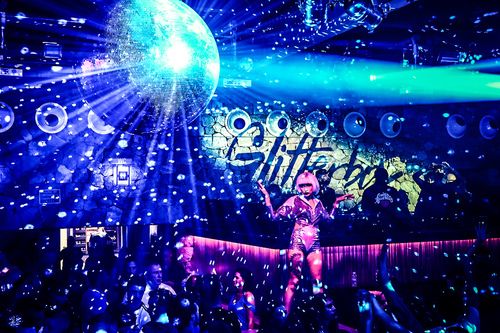 Glitterbox Back At Space Ibiza For 2016 Season with Basement Jaxx, Dimitri From Paris, Todd Terry + more

Following an incredible 2015 season which saw rave-reviews from tastemakers and clubbers from across the board, Glitterbox will return to Space Ibiza this year, hosting Friday nights from 03 June to Friday 23 September 2016 for what will be the legendary Ibiza club’s final season.

It’s not often that a party is as universally loved as Glitterbox, but from Resident Advisor to Marie Claire, there were only positive things being said about Ibiza’s now firmly established house and disco fiesta.

At its heart, Glitterbox embodies the idea that the dancefloor should be the focus of a truly transformative night: something of a rarity in the DJ-idolising culture of the modern club. Every Friday throughout last season Space was transformed into a glittering, hedonistic playground, with extravagant live shows and the finest, most eclectic soundtrack found anywhere on the island truly setting the party apart, complimented by regular appearances by stand-out PAs and local DJs.

Already confirmed for the 2016 season are Basement Jaxx, Dimitri From Paris, Todd Terry, Joey Negro, Roger Sanchez, Simon Dunmore, Purple Disco Machine and DJ Pippi. The full season lineup will be revealed in the next few weeks, but you can expect an impressive collection of talent, all of whom will be given free rein to construct sets that draw from the rich, expansive musical history of house and disco. Savage dance crew Hot Heels – an unmitigated hit last season – will also return in 2016.

“The reaction to Glitterbox in Ibiza last season was one of overwhelming positivity” says Simon Dunmore. “DJs that have real heritage, can read a crowd and know when to drop the right record deserve a platform on the island and I believe it was these bookings that elevated the party’s profile. The Terrace is a perfect venue for Glitterbox, so the decision to stay there for a second season was an easy one.  To be involved in Space’s final Ibiza season is a privilege, and we intended to make it the go-to night on Fridays throughout the summer.”

Last season, Glitterbox relocated from Booom to Space and enjoyed a revelatory sophomore year.  The opening party reviews were exemplary and things only kicked on from there.  Glitterbox’s unique fusion of classic and contemporary soulful dance music, backed by imaginative theming across everything from Mark Wardel’s glamorous artwork to the arousing dance moves of the Savage dance crews Nutbags, Hot Heels and Sink The Pink has fitted Space perfectly, and the Glitterbox crowds happily swelled whilst the Friday night soundtrack continued to impress.