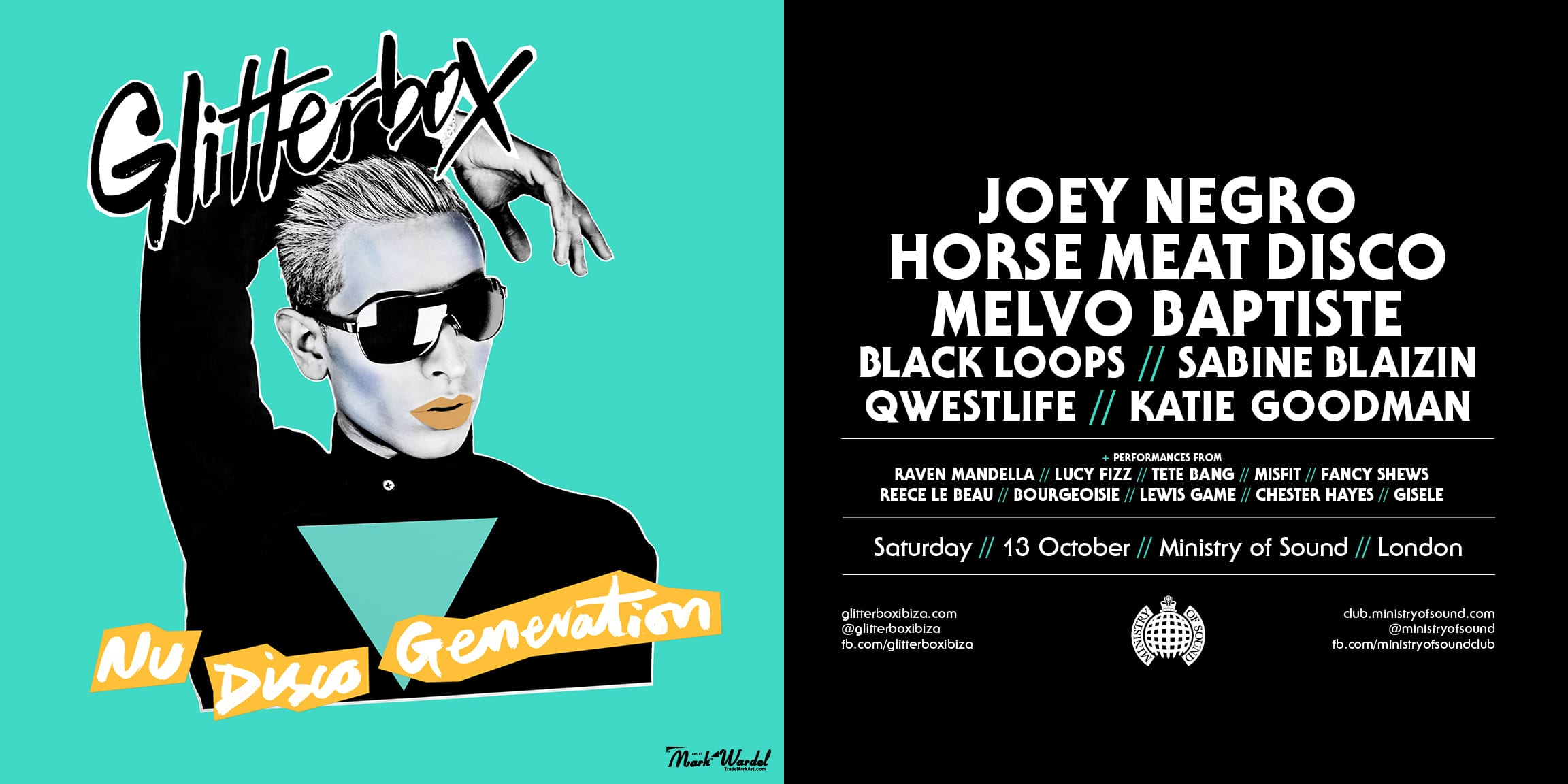 Following Glitterbox’s Ibiza 2018 closing party, the phenomenon returns to London’s Ministry of Sound on Saturday 13th October with another sold out date bringing headliners Joey Negro, Horse Meat Disco and Melvo Baptiste plus some new faces and the biggest crew of performers to date.

Pulling off Glitterbox’s biggest Ibiza season yet, 2018 has also been taking on the world with parties in New York, Zurich, Amsterdam, Barcelona, Croatia and France. This London date completes a run of sold out shows at Ministry of Sound, bringing together DJ’s from the US, Germany and the UK for a night of world class classic house, nu-disco and unabashed dancefloor hedonism.

One of the first artists to incorporate disco samples in house productions, Joey Negro will be throwing down his expert blend of vocal house and disco rarities in Ministry’s main room the Box. Local disco establishment Horse Meat Disco, channelling the halcyon days of The Loft and The Gallery in New York, follow up appearances for Glitterbox in Croatia and Ibiza this summer. Bringing the queer party people, homos and heteros, club kids, fashionistas and guerilla drag queens with them, Horse Meat Disco are the ultimate party starters taking proceedings into the early morning.

Playing in Ministry’s 103 is Melvo Baptiste, the voice of Glitterbox radio and one of the party’s hottest resident DJs, with his take on soul and disco. Joining him in the 103 is Black Loops, a German producer with releases on Toy Tonics and Neovinyl Recordings in his back catalogue. Drawing on funk, soul, disco, 90s UK house and NY house, Black Loops will be picking his Glitterbox selections for the very first time. Having impressed with a debut set at the Glitterbox party at New York’s House Of Yes, Sabine Blaizin comes to Ministry of Sound bringing rhythmic flavour from her Haitian roots mixed with an authentic New York edge. Finally in the 103 will be Katie Goodman, a London-based DJ quickly establishing herself as one to watch and the newest recruit for the roster who cut her Glitterbox teeth at this year’s Defected Croatia festival.

All night long in the Loft will be Qwestlife, a creative partnership between Tom Laroye and Midnight Riot head Yam Who? A transcontinental boogie trip between their hometowns of Paris and London, Qwestlife are sure to delight with their disco-fuelled sound. Accompanying the DJ’s to bring the phenomenon to life on the dancefloor will be Glitterbox’s flamboyant performers including cover star Lucy Fizz, Raven Mandella, TeTe Bang, Misfit, Fancy Shews, Reece Le Beau, Bourgeoisie, Lewis Game, Chester Hayes and Gisele. Creating immersive, uplifting moments in the crowd throughout the night and armed with confetti guns, the Glitterbox dancers, queens and club kids are the stars of the show.

A force to be reckoned with in nightlife culture, Glitterbox generates an inclusive, uplifting party atmosphere designed to unite all on the dancefloor. Glitterbox events are immersive and full of unforgettable moments, using the most spectacular production, dancers and soundtrack to create a truly 21st century disco.