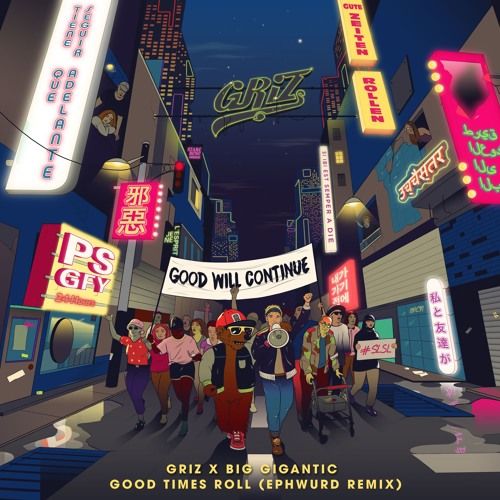 Datsik and Bais Haus, otherwise known as the aces of bass Ephwurd, have done it again. The power duo have given their signature "bass house" touch to Big Gigantic & Griz's hit collaboration "Good Times Roll," resulting in nothing other than a dance floor smashing, head banging remix. Big Gigantic and Griz's jazzy, groovy original receives a driving bassline and some wobbling synths that turn those good-times vibes into a party-all-night track. The remix comes right after Ephwurd's outstanding performance on the main stage (Kinetic Field) of EDC Las Vegas and just in time for the syndication of their Eph'd Up Radio on iHeartRadio/Evolution. The show will air the second and fourth Friday of every month at midnight EST, starting June the 30th, and listeners can expect thumping new tunes from the likes of Hi-Lo & Chocolate Puma, Diplo & Autoerotique, and of course some from Ephwurd themselves.

A mysterious duo by the name of Epwhurd catapulted onto the scene in the summer of 2015 with their mind-bending remix of Major Lazer's "Lean On", alongside ETC!ETC! The industry didn't have to wait long before it was revealed that none other than Datsik and his long-time cohort Bais Haus were behind that bass-heavy production style. Since this epic beginning, Ephwurd have been unstoppable.From collaborating with Jauz to create the festival staple "Rock the Party" to their recent massive release "Vibrations" on Tiesto's Musical Freedom label, Epwhurd never fails to blow up dance floors around the world. 2016 saw them commanding the stage at Paradiso, EDC Las Vegas, VELD, Spring Awakening and more, and in 2017 they will be appearing at the Global Dance Festival, Lollapalooza, Shambhala and more. Their combination of insane production dexterity and explosive performance expertise ensures that Ephwurd is here to stay, and they're only going up.