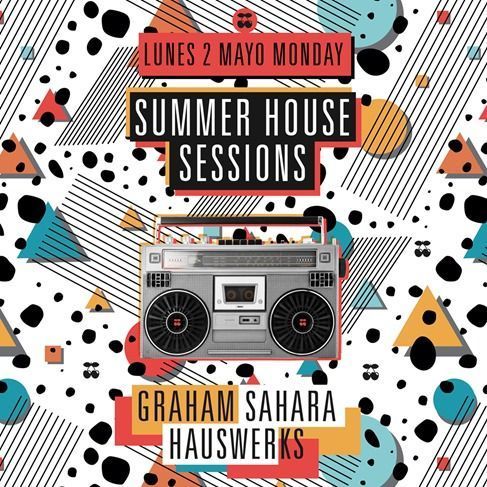 DJ / Producer Graham Sahara will mark 20 years in Ibiza as resident DJ at some of the island’s best loved venues, with an event at Pacha on Monday 2 May. The versatile tune selector, who has held prestigious residencies at Pacha, Savannah, Bora Bora and KM5, will honour the milestone with an exclusive ‘Summer House Sessions’ event at his second home Pacha, alongside Hauswerks (Hot Creations, Gruuv, VIVa Music), where they’ll showcase a selection of up-front and classics tunes from the last 20 years. Tickets are now on sale from www.pachaibiza.com

20 years ago this week a young Graham Sahara arrived on the White Isle during the legendary hedonistic carefree party days of the 1990s.  During this time, Graham has achieved what most can only dream of. A stint working in small bars led to him becoming the first ever resident at the Base Bar and Hotel Es Vive, before he joined the ranks at Bora Bora, debatably Ibiza's most famous beach bar at that time.  Residencies followed at the now defunct yet legendary venues Konga and Morgana, where his hard work continued to pay off as he picked up further residencies at island hotspots; Km5, Savannah, Guarana and many more.

From those humble beginnings, Graham hit the proverbial jackpot, and achieved the dream of every bedroom DJ around the globe, a residency at the legendary Ibiza super club, Pacha, a residency he’s now held for 15 years, that has led to performances at pretty much every super club and venue of note on the island.

Throughout his time at Pacha, Graham has consistently demonstrated his genre-defying ability, playing – at times – up to two or three completely different sets in the club on one night. He has supported the likes of heavyweight underground artists such as Mr C, Terry Francis, DJ Pierre, Reboot, Edu Imbernon and Solomun, through to traditional house music legends such as Masters At Work, Bob Sinclar, Roger Sanchez, Derrick Carter and MK, and in recent years, supported chart topping acts including Tiesto, Swedish House Mafia and David Guetta.

Alongside a tour schedule that constantly takes Graham around the globe, and as a producer hitting the coveted top spots on the dance portals, there are more strings to his bow. In his role as Label Manager and A&R for Seamless Recordings, Graham has compiled over 30 different huge selling compilations, and also holds the position as Director at Pioneer DJ Radio. To top it all off, in 2015 Graham was voted Ibiza Resident DJ by Ibiza Clubbing Guide.

To honour two decades in Ibiza, Graham will host a special ‘Summer House Sessions’ party on Monday 2nd May at his second home Pacha. He’ll be joined by his long term friend and previous Island resident, Hauswerks (Hot Creations, Gruuv, VIVa Music), to play a selection of tunes fit for the 20 year occasion – classics from yesteryear through to new and incoming hits for summer 2016.

Graham will be celebrating his 20th season in Ibiza with more parties throughout the summer in many of his favourite venues with more of his DJ friends from over the years. Follow Graham on Facebook and Twitter (@grahamsahara) for all the latest news and updates.