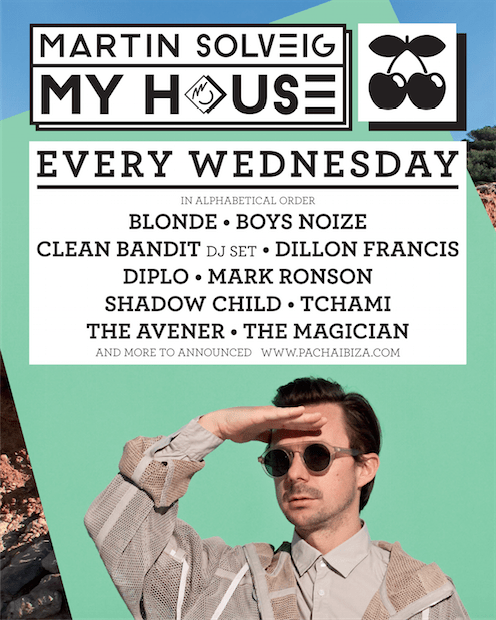 Following the news that the Parisian producer will be returning to the white isle this summer; Martin Solveig can now reveal a burst of worldclass acts that will be joining him for his legendary ‘My House’ residency at Pacha, Ibiza.

Working together over the past few years, residency co-founders Pacha have nurtured the brand to what it is today – building on the huge success of ‘My House’. This year Martin Solveig & Pacha re-join forces and promise to bring the biggest ‘My House’ lineup to date.

Artists to join the UK hitmaker throughout the summer include globally renowned dance music figureheards Diplo & worldwide phenomenon Mark Ronson. Joining them will be fellow Frenchmen Tchami & The Avener, as well as techno punk Boyz Noize and underground master Shadow Child. These are just 6 of many stepping up to the mark this season; boasting one of the most eclectic Ibiza line-ups to date. With many more DJs and producers to be revealed over the coming months, punters can also revel in the sounds of UK house duo Blonde, electronic music’s tyrant Dillion Francis, Belgian titan The Magician and exclusive appearances from the likes of Clean Bandit.

Expect to hear brand new collaborations and a series of new material tying into the residency in the coming months – proof that Martin’s ‘My House’ Ibiza is set to blow the success of last year through the roof.