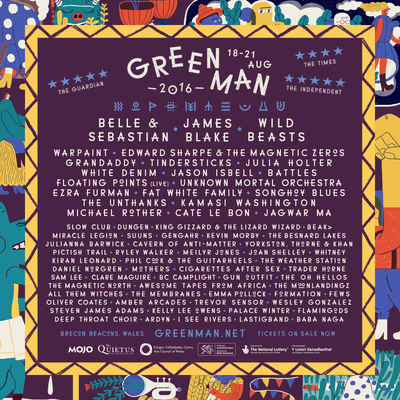 We've got a freshly picked, bumper batch of names to add to the bountiful selection already adorning this year's bill.

Running from Thursday 18th – Sunday 21st August, we're elated that LA indie rockers Edward Sharpe & The Magnetic Zeros are set to join us at the fourteenth Green Man. With a new album imminent – and a stage-hogging 10 members in tow – their big band, beach-licked grooves will be a glorious addition to the (already glorious) Brecon Beacons.

Returning to the festival are Nottinghamshire veterans Tindersticks, whose atmospheric introspections – now 25 years in the game – still sound uniquely their own. Sister act The Unthanks return, too, with kind offerings of soft-lit folk. Slow Club, meanwhile, are sure to turn a few heads with their classic indie pop.

Glitch-rockers Suuns are booked in to deliver a lesson in head-nodding intensity, with Portishead-descendants Beak> also specialising in pop thick with electric atmosphere. Kevin Morby, with a new album due any minute, will have feet stomping to the beat of his rousing folk rock.

Stereolab off-shoot Cavern of Anti-Matter are sure to have you grooving along to their rough-and-ready electro jams, while Cigarettes After Sex will provide ambient soundscapes to recline to afterwards. BC Camplight, after sadly forced to cancel last year, will now finally bring their endearing pop to the festival.

There's chuck loads more music still to be announced, too, along with our FINAL HEADLINER! Tickets are on sale now from greenman.net!