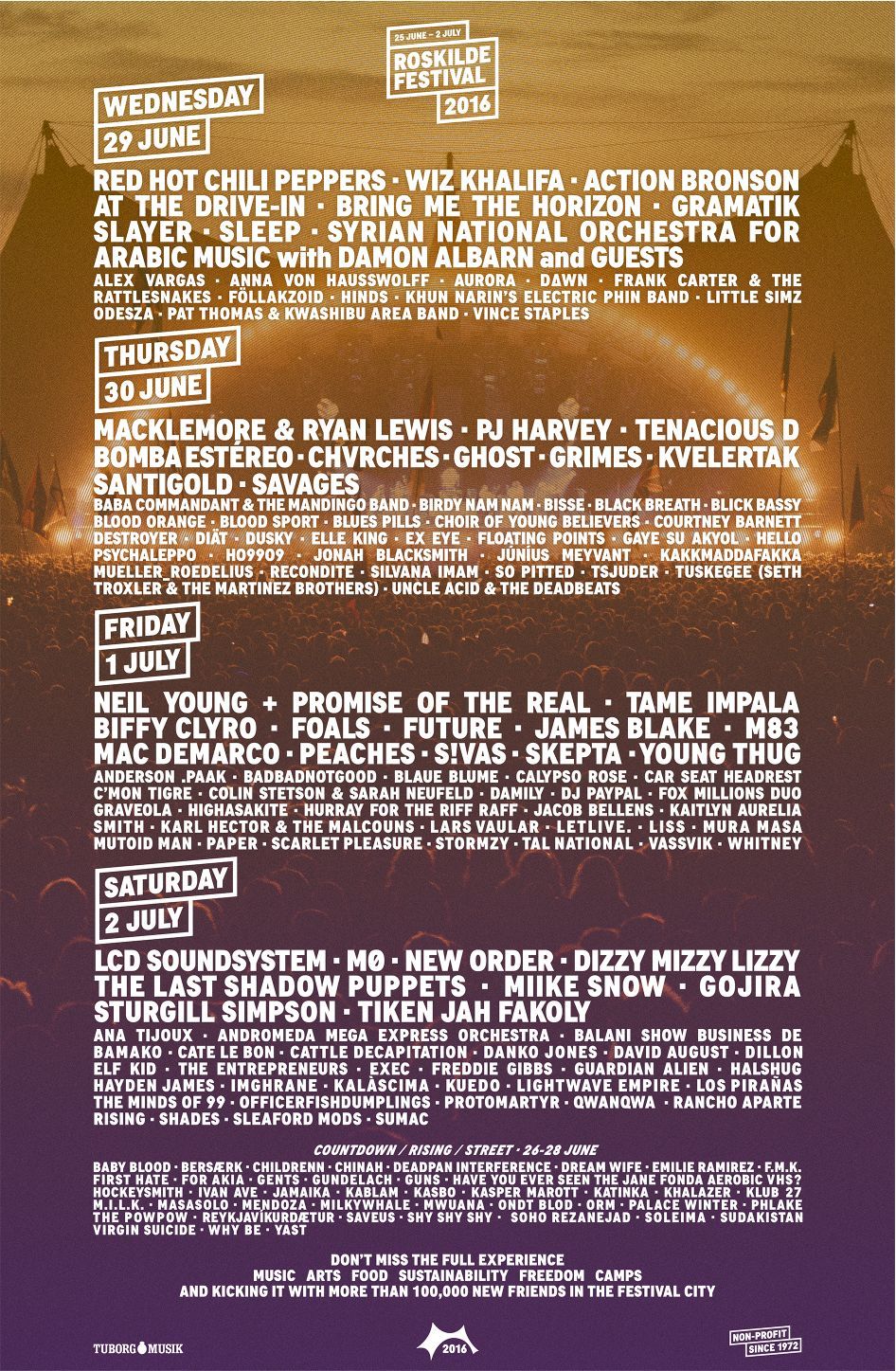 A whopping 105 acts have been added to the Danish festival’s line-up. A total of 179 acts from 30 countries will play Roskilde Festival 2016.

With today’s additions, 179 acts from more than 30 countries are set to play the non-profit festival to 130,000 enthusiastic fans who have come to expect a line-up of both international icons and the stars of tomorrow.

The acts will be playing nine unique stages, joining the audience in celebrating togetherness, community and diversity over the course of eight days in the temporary city known as Roskilde Festival.

Pop music redefined
Acts such as Grimes, MØ, Tame Impala, Santigold, James Blake, M83, Ghost, Future and Bomba Estéreo are all redefining pop music in 2016. From hip hop to metal, from world music to psychedelic rock, they are all exploring the powerful pop potential.

Simultaneously, the line-up shows that rock music is very much alive and kicking with metal heroes Slayer, Gojira and Cattle Decapitation as well as hard-hitting and melodic acts like At the Drive-In, Foals, Bring Me the Horizon, Tenacious D, The Last Shadow Puppets, Kvelertak and Uncle Acid and the Deadbeats.

A lesson in rock history with Neil Young
Eight years ago Neil Young took to the festival’s iconic Orange Stage and gave his fans a lesson in rock history. The 70-year-old legend now returns with his band Promise of the Real, featuring Willie Nelson’s sons. More than just a backing band, they have inspired Young to explore roots traditions on their new album.

The politically charged and ever-relevant Canadian activist will now have the chance to expose a new generation of festival-goers to his impressive back catalogue with a string of hits that have influenced and shaped rock history over the past 40 years, including Cinnamon Girl, Rockin’ in the Free World, Cortez the Killer, Heart of Gold, My My, Hey Hey and Down by the River.

Diversity at the core
Roskilde Festival is a celebration of diversity. With guests, volunteers and artists from all over the world, the line-up reflects openness and curiosity as well. Modern icons such as New Order and PJ Harvey, rule-bending acts like LCD Soundsystem and Syrian National Orchestra for Arabic Music with Damon Albarn and Guests, electronic game-changers like M83, Chvrches and James Blake, urban treasures like Bomba Estéreo and Santigold and so much more.

44 of the 179 acts are Danish, with MØ playing Orange Stage for the first time and starlets like Liss and Alex Vargas showing signs of things to come in Danish pop music.

“Neil Young is as relevant as he’s ever been with his astonishing ability to try new things and work with new people. During his last visit in 2008 he called Roskilde Festival the greatest festival in the world, and there’s no doubt in my mind that he will once again deliver an overwhelming show with both new material and all the classics.”

“With renowned acts like Grimes, MØ and Santigold, pop music will play a big part in our line-up this year. Even artists such as Ghost and Tame Impala show how metal and psychedelic rock are also experimenting with pop music, rewriting both their own genres and pop itself. We see the same things with hip hop acts like Future, Young Thug and Wiz Khalifa spitting out hits without losing their credibility or edge as rappers. We can’t wait to see our guests work their way through a diverse line-up with a pop sensibility that will take them to memorable concerts they perhaps didn’t plan on going to.”

“We have literally traveled the world the past year to find the stars of tomorrow that will perform next to legends and established acts. We see Roskilde Festival as the city where you can find all the music you didn’t know you were going to love. During our travels we have found new favourite artists ourselves, and we’re convinced that our enthusiastic guests will fall in love with new artists at the festival as well.”

A handful of remaining acts will be announced before the festival.

Get to know the full line-up in detail on www.roskilde-festival.dk.