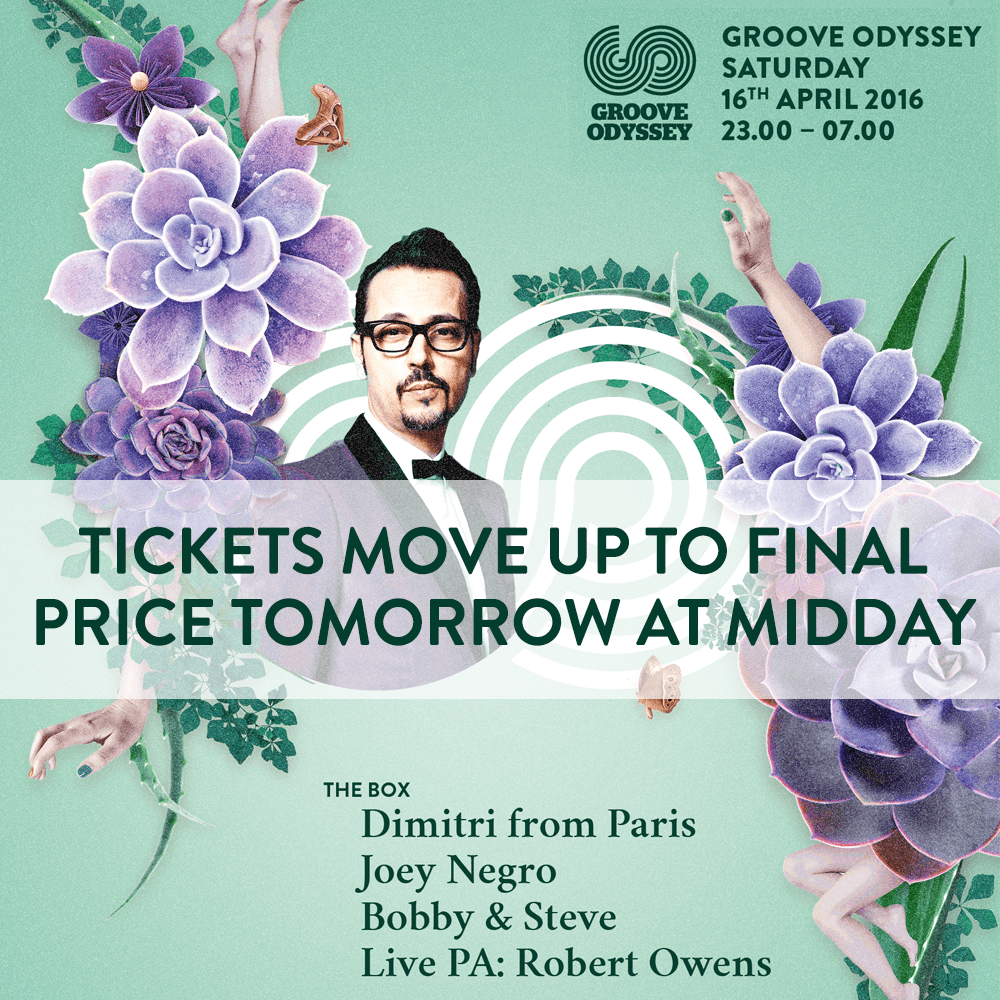 With great excitement we are proud to bring you the world famous Playboy Mansion musical director, the one and only Dimitri from Paris, who’ll be travelling with his slick mix of soulful, disco infused selection, alongside the UK’s very own Joey Negro. This collaboration is guaranteed to be a Golden Disco ball dream. Groove Odyssey residents and UK soulful house pioneers, Bobby & Steve will be opening the vibe in the main room, along with a surprise PA who will be announced shorty.

Dimitri From Paris (actually, originally from Istanbul) has spent the past thirty years on the radio and lighting up dancefloors with his characteristically uplifting fusion of House, Disco and Soul. Dimitri started out playing at underground clubs in France before getting a slot on a pirate radio station in the capitol in the eighties. Aside from being the first to host a house music show in France, Dimitri has remixed everyone from Bjork to New Order as well as producing the soundtracks to fashion campaigns for Chanel and YSL, among others. Recently he’s enjoyed an incredible run in Ibiza and toured in America last June. Let’s see what magic he has in store for us this time round.

Joining Dimitri From Paris in The Box is one of the most prolific and skillful producers and DJs the UK has ever seen, Joey Negro. Arguably the most well-known alias of Dave Lee, Joey Negro is a soul and disco loving producer and vinyl junkie whose career has spanned three decades and a multitude of underground and crossover hit records. He’s spent thirty years as one of the world’s most respected DJs, and runs the equally esteemed Z Records. His last set back in November was truly mind-blowing, so make sure you don’t miss out.

After cooking up a storm on New Year’s Day, our favourite UK soulful house pioneers and Groove Odyssey residents are also back to take over The Box. From warehouse parties in the eighties, to soul weekenders in the nineties, Bobby & Steve sure know how to get a crowd going. There is no doubt that the two have created a timeless legacy, and a chance to see them play should not be missed.

In the Baby Box, it's 80’s and 90's Soul, Funk and Boogie headlined by DJ Bigger and Ronnie Herel, while The Loft will be hosted by the mighty Housefm.net with special guest Sy Sez.

Groove Odyssey has become a compulsory night out in the house musical calendar, and continues to entertain at the highest level. Be prepared for another uplifting experience and take this as an official warning to get your tickets now. See you there.