Marius Circus - Had No Clue 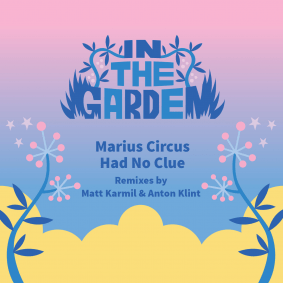 Marius Circus - Had No Clue

Marius Circus is back on his In The Garden imprint mid-June with ‘Had No Clue’, accompanied by remixes from Matt Karmil and Anton Klint.

Norwegian producer and DJ Marius Circus has been steadily building a name for himself via support from the likes of Prins Thomas and his Full Pupp imprint and of course the steadily growing following he’s built for his very own In The Garden imprint which has gained support from Nu-Disco luminaries like Ewan Peason, Andrew Weatherall and Pete Herbert, a telling sign of the quality embodied in this Oslo based artist’s material.

Title-track ‘Had No Clue’ leads here, a sun-drenched slice of dropped tempo house fuelled by bubbling arps, choppy resonant synth licks, airy atmospherics and soft bumpy rhythms. Next up hot off the back of his Ben UFO and The Black Madonna backed Studio Barnhus single Matt Karmil steps up to stamp his unique mark on ‘Had No Clue’, stripping things back to a soft, ethereal feel led by fluttering synth swells, sweeping pads and rumbling low end.

The original of ‘Tyst’ opens the B-Side with chugging square-wave bass, dynamically evolving twinkling arpeggios and crunchy drums before Anton Klint’s remix rounds out the package, edging into darker realms via howling reverb burst, eerily unfolding atmospherics and the original gritty bass at its core.