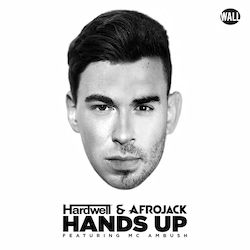 The award-winning Dutch DJs and producers have teamed up for the monumental ‘Hands Up” transcending the best of signature Dutch house music and big room aesthetics. Released by Wall Recordings, the dynamic track spans between classic big beats to well-crafted progressive builds and catchy vocals from MC Ambush. Both Afrojack and Hardwell are having a huge year, simultaneously celebrating over 300 episodes of their popular Sirius XM radio shows to performing record-breaking headline shows around the world, with Hardwell even turning up as the surprise DJ guest at Afrojack’s recent birthday event NO PLACE LIKE HOME on Sept 9 in Rotterdam Ahoy. Now together, the global dance music artists and friends are set to turn club floors on fire with their latest collaboration. After a short preview on Hardwell’s global radio show ‘Hardwell On Air’, the audience response was wild and clearly a sign of the song’s catchy vibe and huge appeal.

Having earned the coveted title of #1 DJ according to DJ Mag Top 100 DJs poll two years in a row by the age of 26, Hardwell's proven record of success and versatility makes him a formidable force in the music industry. The multi-talented producer, musician, label owner, documentary film maker and DJ began his successful career at the age of 14 and has since been nominated for and received a wide accolade of awards including the 2014 MTV European Music Awards for "Best Dutch Act", "Best Global DJ" at the 2016 IDMA's in Miami and recently winning “Best Big Room House” and “Best International DJ” at the 2017 DJ Awards in Ibiza. His 18-month world tour "I Am Hardwell" featured at cities such as Singapore, Istanbul and Jakarta, earning him worldwide recognition and contributed to Hardwell becoming one of the electronic scenes most ‘clicked on’ artists with over 753 million hits on YouTube and 8.9 million likes on Facebook. Having worked with many of the music industry’s most recognizable artists such as Jason Derulo and Craig David, his new single with Afrojack promises to be another runaway success.

Afrojack has been one of dance music’s front-runners and has an incomparable reputation as a DJ and producer. Born Nick van de Wall, the Dutch electronic music phenomenon collaborated with the likes of David Guetta, Steve Aoki, Diplo, Pitbull and The Black Eyes Peas, won a Grammy for his (and David Guetta’s) remix of Madonna’s ‘Revolver’. He is known to always be dedicated and devoted to bringing the best music experience to his listeners and rocks stages everywhere from Ibiza’s finest venues to globally acclaimed music festivals. He spent 6 years on the top 10 of DJ Mag’s coveted Top 100 DJ’s list and found his own record label called Wall Recordings. He’s been nominated for a wide variety of awards such as "Best Electronic" and "Best World Stage Performance" at the MTV Europe Music Awards and the NRJ Awards. Recently, he was nominated for an MTV Video Music Award for Best Dance Video for “Gone” featuring Ty Dolla $ign and spent 4 weeks at #1 on the US Dance Charts for “Another Life” with David Guetta. Afrojack has a long record of surpassing expectations and successfully making a place for himself in the music industry.