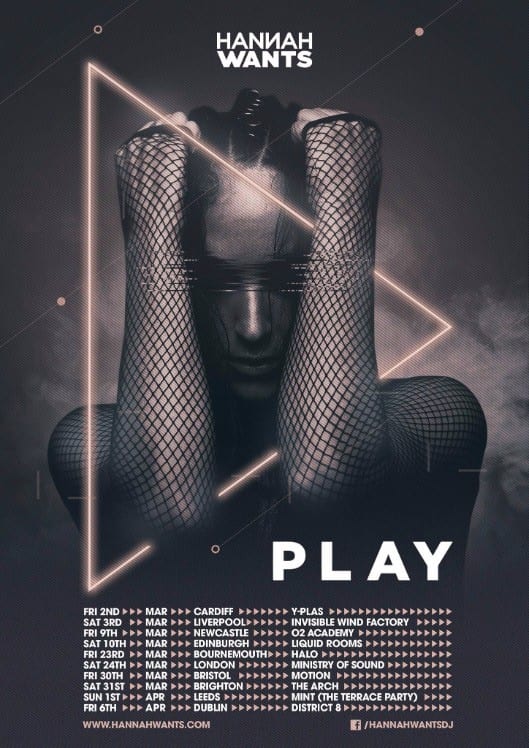 Hannah Wants has announced her brand-new PLAY tour, continuing her popular concept across a varied run of locations in 2018, touring some of the UK’s most esteemed venues across 10 cities.

With an elite selection of DJs chosen by Hannah to showcase their skills alongside her, the UK producer will also give a debut the finest rising talents by holding her own interactive DJ search via her website here. Looking for up and coming artists yet to find their big break, fans can submit an application form to Hannah, with 10 winners (one for each tour date) set join the PLAY line up, playing an opening set on the tour.

“I know there will be so many talented and unique DJ’s out there who are passionate about the art… I want to find that talent!” said Hannah, whose previous talent searches have unearthed the likes of Devstar, Joshua, Jack Swift, and TIMANTI.

The specially curated nights will grace some of the UK’s best tastemaking clubs, including; Motion in Bristol, Mint in Leeds, the O2 Academy in Newcastle, District 8 in Dublin, and London’s Ministry of Sound, withHannah ready to press PLAY on an exciting start to 2018.

Much like Hannah’s iconic PLAY dates, Hannah will also embark on ‘PLAYGround’; a small tour that will deliver the same dark, raw, authentic rave concept, bringing a more intimate atmosphere to a series of smaller venues, as Hannah plays Birmingham, Glasgow, Dundee, and Aberdeen. Going back to basics with minimal production, PLAYGround is all about 100% music and vibe, where the crowd and DJ booth feel united as one.