Hannah Wants announces the line up for her 2016 ‘What Hannah Wants’ UK tour! 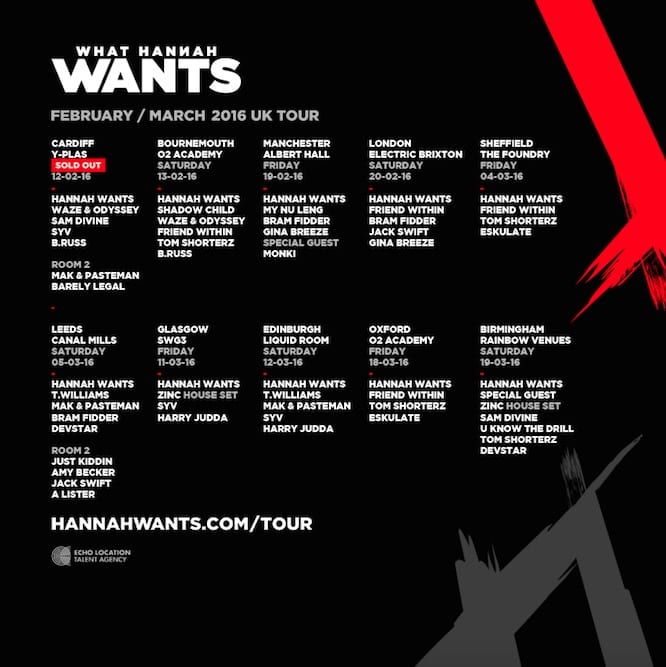 Hannah Wants announces the line up for her 2016 ‘What Hannah Wants’ UK tour!

The time is drawing nearer for Hannah Wants’ UK-wide tour, ‘What Hannah Wants’, and the full lineup has just been revealed, alongside the five lucky winners of her 2016 DJ search.

Waze & Odyssey, Shadow Child, Friend Within, T. Williams, Zinc, Sam Divine, Monki and more will accompany Hannah on her 12-date tour, as well as a couple of yet to be announced special guests – full line-up and dates below.

Hannah has also announced the winners of this year’s ‘What Hannah Wants’ DJ competition, each handpicked by Hannah herself for their live mixing skills. As part of their prize, the four talented newcomers will accompany her on the road.

Joining Hannah in Cardiff and Bournemouth is B Russ, followed by Gina Breeze in Manchester and London, Eskulate in Sheffield and Oxford, Harry Judda in Edinburgh and Glasgow, with one of last year’s winner Devstar making a return for the Leeds and Birmingham shows.

Beginning in Cardiff on the 11th February, Hannah will work her way across the country, taking in Manchester, London, Dublin, Belfast, Sheffield, Leeds, Glasgow, Edinburgh and Oxford, before a triumphant return to her hometown of Birmingham on Saturday 19th March.

Hannah’s skyrocketing profile has seen her become in-demand across the globe. She’s toured across the US, including a headline slot at tastemaking New York club Verboten, and a gig at the infamous HARD Summer festival, with other European festival highlights including EXIT Serbia, We Are FSTVL, Parklife, Glastonbury, Hideout Croatia, South West Four and Creamfields.

Hannah also had a busy summer in Ibiza, the island that helped her to make her name – she took over W.A.R at Ibiza Rocks twice (including the closing party), and played 4 dates at Ibiza’s biggest bass music party, Together at Amnesia.