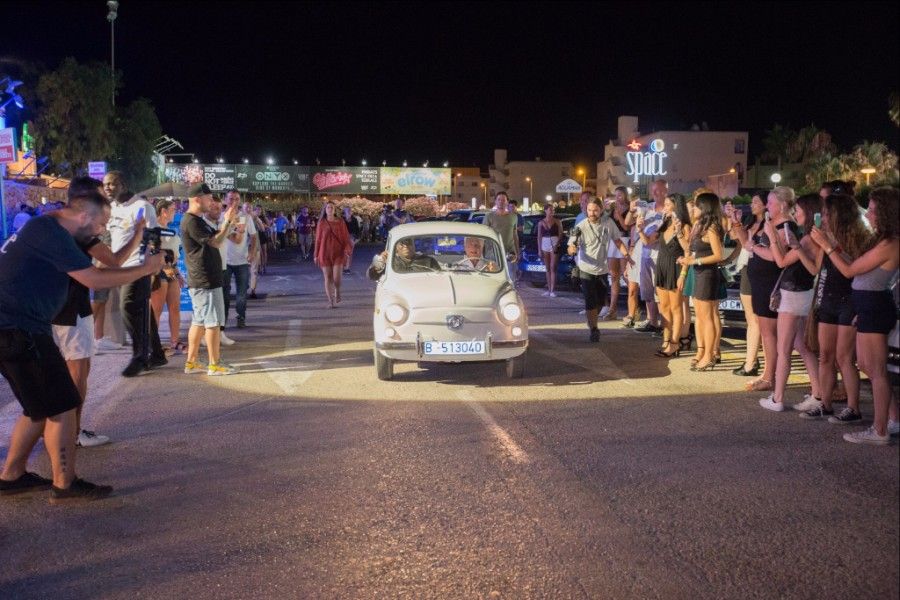 The name Carl Cox is synonymous with Space Ibiza. The man is not only the clubs most loyal DJ but also the most loved by the clubbers. People come from around the world to dance to the beat of this mentor and founder of the now famous phrase “Oh yes… Oh yes!”. In addition, both for the club itself and for the founder Pepe Rosello, Carl has for a long time been considered a member of the family.

Year after year, the birthday of Carl Cox has been a very special event and we celebrate it in style together with the visitors of Space. On this occasion, Pepe Rosello drove Carl to the main door of the club in a special Seat 600 from 1965. It’s very small but iconic car and without doubt an image that will be remembered forever.

People who waited to enter the club were astonished to see Pepe and Carl driving to the main door in a tiny car while greeting everyone who was waiting to get in to the party. Pepe made sure that he stopped the car and lets people take selfies with them.

The entrance was covered in red carpet which welcomed Carl like a Hollywood movie star while he was walking into the club, all the time accompanied by Pepe Roselló. He was greeted by a corridor flanked by Space staff holding torches and dressed in t-shirts with slogan of Space’s 27th anniversary printed on them.

Later, in the main room, when Carl took to the controls during his “The Last Chapter of Music is Revolution” (every Tuesday at Space Ibiza). Pepe Rosello wanted to honor him by singing “Happy Birthday” so when he did the audience cheered them both and celebrated yet another birthday of one of the most beloved DJs on the planet.