Hardwell performs at charity event with aims to educate 100,000 children 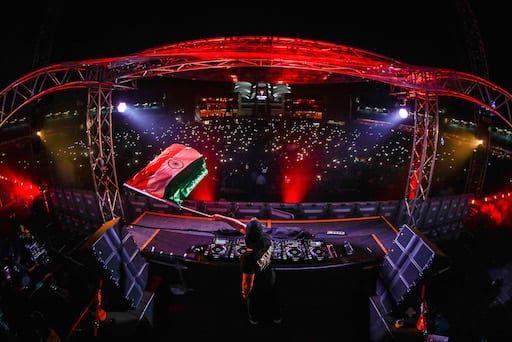 Hardwell performs at charity event with aims to educate 100,000 children

On Sunday 3rd December 2017, global electronic pioneer and philanthropic figureHardwell returned to Mumbai to once again partner with India’s Guestlist4Good Social Enterprise and Mumbai based non-profit organisation Magic Bus for the ‘World’s Biggest Guestlist’ festival’ in association with his United We Are Foundation. Two years on from his previous visit in India, where Hardwell and partners provided education for over 18,000 young underprivileged children living in India. This 2017 aid event succeeded in drawing a capacity crowd of close to 75,000 people at the D.Y. Patil Stadium and is on course to securing enough donations by fans and sponsors alike to bring a brighter future through education to more than 100,000 young children.

Capturing the hearts and minds of millions of fans around the world, Hardwell and hisUnited We Are Foundation working with Guestlist4Good and the ‘World’s Biggest Guestlist’ festival’ managed to draw attention to the social issue of the lack of education for underprivileged children living in India.  Utilising his profile as an international electronic artist, former 2 x World #1 DJ and founder/ambassador for the United We Are Foundation, Hardwell, along with all the partners and ‘World’s Biggest Guestlist’ festival’, was able to build upon the support and donations that the 2015 charity event received. As such Hardwell’s decision was to not return to India until he could follow up on the earlier work that the Foundation and its partnerships had managed to achieve. Through a lengthy period of planning, the support of fans and sponsors, and the power of music, the second show was an opportunity for an even greater number of fans to either attend the show in support or participate by pledging their backing of the cause through donations. The second show also marked the first time Hardwell had performed in the country since that historic day back on 13th December 2015.

Speaking about the objectives behind this second ‘World’s Biggest Guest List’ eventHardwell said: “Thanks to the incredible love and support of the fans we managed to achieve something truly historic with our launch event back in 2015. It’s truly mind-blowing to be able to complete a second show and bring about an even bigger social impact due to the love and support from the fans and partners involved. After the first show, it always felt like that was the beginning of the story rather than the end. We surpassed our goal and managed to raise awareness on a very important subject, yet everyone in the team felt we could build upon what happened back in 2015. Now in 2017 we’ve returned and completed what has been one of the most amazing and truly inspiration shows I have ever been a part of. To be able to deliver a charity event on this scale and know that the success of this event feeds back into the community where it will make an impact on the lives of young children is something very special”.

Always wanting to push the scale of the event in a bid to achieve the target of the show, Hardwell invited friends to join him as part of the very special day. Completing the line-up on the day was fellow Dutch superstars and renowned DJ duo W&W (currently ranked #14 in the Top 100 DJ Poll). Also on the line were Revealed Recordings regulars Kill the Buzz and Suyano who provided additional DJ support on the day. Another name was local DJ hero and emerging star Shaan.

Commenting on their participation W&W said: “It felt amazing to be able to be a part of the World’s Biggest Guestlist Festival. The crowd in India was one of the best. So it’s fantastic to be able to thank them for the love and especially because it is a part of this amazing cause for education for Indian children.”

Whilst Kill The Buzz reflected on the event: “Being part of the first ever ‘World’s Biggest Guestlist’ event was something very moving for me. To witness the passion of the fans first hand and see the impact the event had as a social movement towards improving the lives of many young children was truly special. So I’mhonoured to be a part of this 2017 edition and to be able to give my own support and backing to the new project. This is an incredibly important matter that affects the lives of millions of children in the country!”

The ‘World’s Biggest Guestlist Festival’ (WBGLF), is a Guestlist4Good initiative, founded by Shailendra Singh and in association with United We Are Foundation, that working together with NGO Magic Bus  created a massive two day event that was a beacon for awareness and support, as they work towards steering the lives of children towards a better life with better life skills, and better opportunities, in the journey from childhood to livelihood.

Speaking further about the festival, Shailendra Singh says, “Hardwell is our Firestarter. By donating his performance in 2015, he won the hearts of the nation and changed the lives of children in need. His choice to return only for this cause – and bring his friends! – is commendable. The world has never been more divided. The only thing that will unite us is love. Hardwell performed for love and I know that India and his fans are grateful for that!”

To contribute to the cause of ‘United We Are by Hardwell’, fans can secure donor passes on:
https://foundation.djhardwell.com/

To donate directly to Magic Bus and change the life of one child, please visit:
http://guestlist4good.magicbus.org/