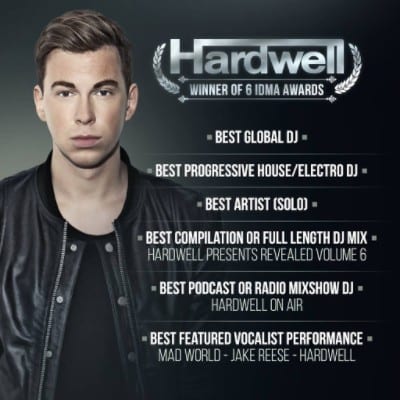 After a standout 2015 that saw him dominate charts with the release of his acclaimed debut album United We Are, break gate records with his I Am Hardwell – United We Are world tour, and launch his charity platform the United We Are Foundation with the historic ‘World’s Biggest Guestlist’ aid event in Mumbai, Hardwell has maintained a busy and ever present position in the modern day global dance music scene. Thanks to the support of his fans Hardwell has once again featured strongly at the International Dance Music Awards (IDMA’s) winning six awards in the 2016 edition of the ceremony; earning the accolade for ‘Best Global DJ’.

With wins that include ‘Best Featured Vocalist Performance – Title, Vocalist/Artist’, ‘Best Artist (Solo)’ and ‘Best Progressive House/Electro DJ’, as well as ‘Best Podcast or Radio Mixshow DJ’ for his Hardwell OnAir show and ‘Best Compilation or Full Length DJ Mix’ for his Hardwell Presents Revealed Volume 6 album. Which all recognise his outstanding achievements in what was been another sensational 12 months of successes, Hardwell has further cemented his name in the electronic music history books. These awards celebrate a year that has seen him collaborate with fellow Dutch icon Afrojack on ‘Hollywood’, release one of the biggest tracks of his career in ‘Mad World’, and, through his charitable efforts with his United We Are Foundation, help raise enough money to educate over 18,000 underprivileged children.

With the release of his latest track ‘Run Wild’ featuring Jake Reese, and following his breath taking closing set on day 2 of Ultra Music Festival this weekend gone. Which featured 12 fresh new tracks, as well as a guest appearance from Craig David, with the pair premiering their new single ‘No Holding Back’. Hardwell continues a stunning run of form that has been building momentum for some time now. And with him taking home six awards from this years IDMA’s, following him being one of the most nominated artists in the 2016 edition of the awards, it seems that Hardwell’s 2016 is set for further and wider success than all his previous years to date…