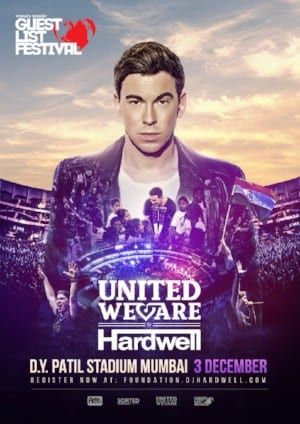 A full 4 months before he will perform, over 125,000 people have already registered to get on Hardwell’s Guestlist for his United We Are at the ‘World’s Biggest Guestlist Festival’. To have so many fans vying to get on the guestlist so early, is absolutely unheard of and is testament to the love and loyalty that that Indian fans have for Hardwell. After the overwhelming success of the previous World’s Biggest Guestlist event held in December of 2015, this years ‘United We Are’ has already cemented itself as one of 2017’s most talked about electronic music events. You’ll have to be quick however if you’d like to get yourself on the World’s Biggest Guestlist as the deadline for phase 1 registration is set to slam shut on Monday 14 August 2017, 5pm CET.

In cooperation with Shailendra Singh’s GuestList4Good and Hardwell’s United We Are Foundation, Hardwell will be taking over the third day of the World’s Biggest Guestlist Festival (WBGF). Closed by Hardwell on Sunday, Dec 3, the festival will accommodate for sports, live Bollywood and pop music. As the first and only headliner announced for the festival this far, all 125,000 registrations are for the charitable Dutch DJ.

Speaking about the event, Hardwell said: “It’s overwhelming to see that over 125,000 have already registered for the event in Mumbai. The WBGF really does hold the key to the future for so many young children throughout India and once again we are striving forward to achieve our goal of providing for the education of 100,000 underprivileged children through the Magic Bus programme.”

The ‘United We Are by Hardwell’ show will see Hardwell be joined by some of his DJ friends in an attempt to raise awareness about the challenges to basic education that the children of Mumbai, and across India, are exposed to on a daily basis. The event will also bring positive social change in India as it will receive international awareness- similar to the 2015 edition, which had over 23 million shares across 75 countries online, 80,000 lucky fans on ground and was recognized by the United Nations.

Shailendra Singh, Inceptor of Guestlist4Good expressed, “Hardwell won the love of the nation, and the world, when we educated 18,200 children through the World’s Biggest Guestlist in 2015. He has an absolutely massive heart to return to India to headline Day 3 of the festival, and educate 100,000 children. He is a firestarter, and that fact that so many fans have registered so early to get on his guestlist, is proof the love and loyalty that India has for him.”