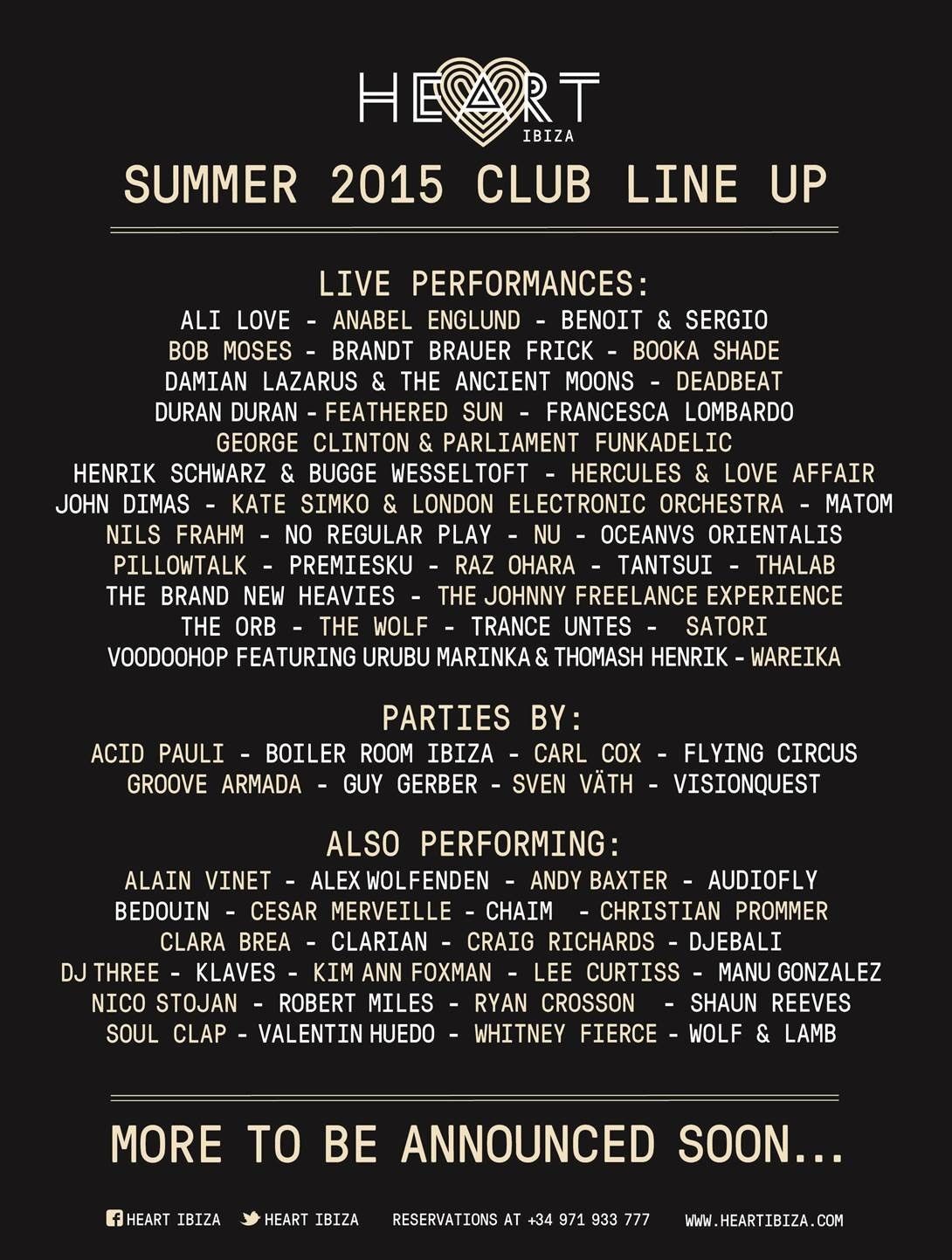 HEART Ibiza is a dream come true thanks to the work of an insightful and creative team. It was founded on the idea of designing a unique sound experience.
The concepts behind the brand have been influenced by a diverse host of ideas with references to the intimate set up of 1990s MTV Unplugged as well as the true essence of the Ibiza party scene of the 1960s. This, along with the latest in technology, will be used to create an unforgettable experience for a small group.

The line-up will include a range of live music composed by a selection of acts who capture the ethos of Heart Ibiza. Offering a kaleidoscopic tour of dance music, incorporating globally acclaimed bands, the program of Heart Ibiza will include legendary names such as Duran Duran, George Clinton and Parliament Funkadelic as well as a long list of artists who are setting trends and are at the forefront of today’s electronic music scene. Among them are the inimitable Damian Lazarus & The Ancient Moons with three exclusive live appearances in Ibiza, German composer and pianist Nils Frahm, the collaboration between the legendary Henrik Schwarz and Bugge Wesseltoft, and classical instrumentalists Brandt Brauer Frick. This diverse and influential list of musicians are joined by veterans Booka Shade, Andy Butler’s famous project Hercules & Love Affair, the Pillowtalk pioneers of ‘ambient house’, The Orb and Scissor and Thread signing, Bob Moses.

Reinforcing the magic of its musical programming and strengthening the quality of each night throughout the summer season, HEART presents heavyweights such as Shaun Reeves, Lee Curtis, Craig Richards, Soul Clap, DJ Three, Clarian, Klaves Christian Prommer and Cesar Merveille as well as distinctive, unmistakable vocals from the likes of Anabel Englund, Ali Love and Benoit & Sergio.

It is important to the brand to create a new identity, presenting celebrated new talent whether it be The Johnny Freelance Experience, the Moscow trio, Tantsui, minimalist, Thalab or six piece, Trance Untes, this has been and will be another driving force behind this big family they call, HEART.

In addition, the internationally successful streaming platform, Boiler Room plunges into the unknown, featuring a secret line up built around evocative musical content and uncompromising artists.

Openlab, the radio channel, will also bring together cutting-edge culture, the arts, media, technology and innovation to HEART. Party hosts for the brand, they will be responsible for developing here, through streaming technology and the experience of its founder, tastemaker radio host and producer, Robert Miles, and will spread the sound of HEART to every corner of the Balearic Islands and beyond.

HEART’s official grand opening of season 2015 will be lead by unconventional instrumental six-piece ensemble, Trance Untes on 27th June. As well as this, 30th June marks Heart Factory presenting a very special collaboration between the legendary Sven Väth and world famous pianist, Nils Frahm; this promises be one of the biggest events of the year.

Buy your ticket at: www.heartibiza.com/reservas/club/

Book your table at: www.heartibiza.com/reservas/