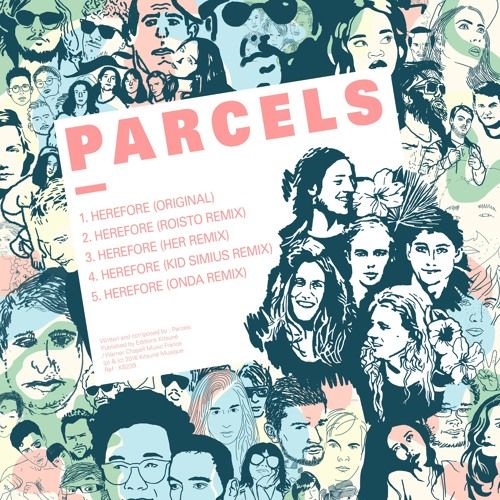 Parcels are a funk-pop group from Byron Bay Aus- tralia conceived in mid 2014. Patrick Hetherington, Louie Swain, Noah Hill, Anatole Serret and Jules Crommelin forged a tight musical bond in the years previous, performing in an array of projects ranging from metal bands to folk ensembles. Thereafter the broad spectrum of the members’ influences and sen- sitivities jelled in a unique blend of contemporary electronica and matured funk disco.

The five piece formed during the final stretch of high school and spent the remainder of the year between bedroom studios and dimly lit garages recording their first, self-produced EP. Well received in Aus- tralia and Europe this debut represents the first re- cording ever produced by its members, where wide synth soundscapes and an electronic rhythm section meet spirited guitars and five part vocal harmony.

Shortly after this first release all five members left the sunny shores of their coastal Australian home- town for Europe’s hub of musical inspiration, Berlin. With a one way ticket, keyboards and minimal funds, the tedious task of relocation was undertaken.

The bold action of moving to the other half of the world paid off as the quintet’s synth loaded funk caught the eye of ever curious label Kitsuné, who featured a Parcels tune on the 2015 edition of their famous Maison compilation series. Soon enough they met Gildas Loaec, founder of Kitsuné, and were wel- comed with open arms to the foxy family.

Now officially signed to the Parisian label, firmly footed in Berlin and experiencing an increase in mo- mentum, Parcels are currently honing their sound this time in small urban flats much to the distress of unhappy neighbors.

On the upcoming release, Kitsuné invites you to ex- plore the many facets of Herefore’s addictive melo- dies, through the work of remixers who, just like Par- cels, combine and rearrange worldwide influences: Finnish disco guru Roisto, French dapper duet Her, Berlin native Kid Simius and L.A. newcomers Onda.

The driving concept behind Parcels is contrast. The musical direction blends vintage and contemporary influences together while the instrumentation starkly contrasts digital and analogue. On stage, their live set is consistently energetic : a different, more orga- nic spin on their tracks provides an electronic disco channeling the soulfulness of early Chic. Captivating, vital, and musically impressive.

Although sporting a hairdo worthy of a 70s surf culture throwback, Parcels’ music and style point elsewhere. Where exactly ? In a joyful future where humanized Daft Punk would decide to groove along with Steely Dan and Frank Ocean.

All stars are aligned and with such a line-up we look forward to all tomorrow’s parties.