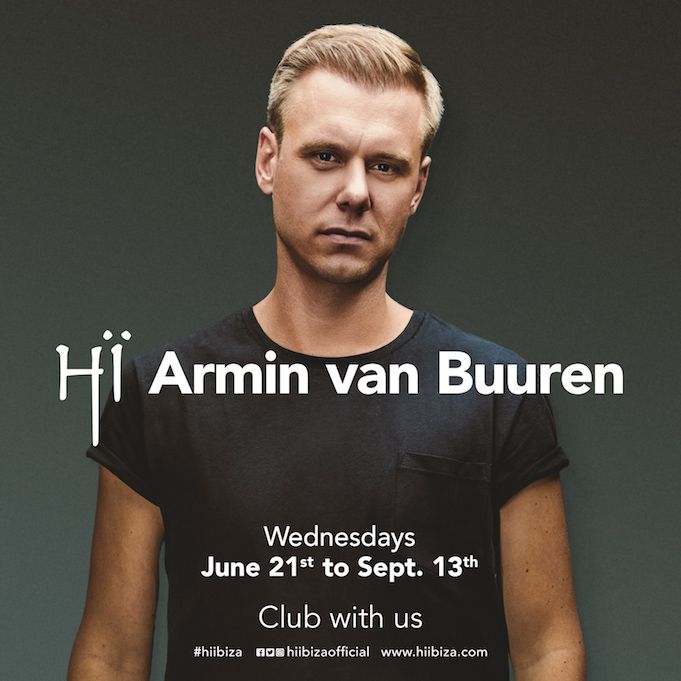 This summer Ibiza enters an exciting new chapter with the much-anticipated launch of Hï Ibiza, the brand new club by Ushuaïa Entertainment. The club formerly known as Space will be elevated to new heights, with a fresh new look and the most advanced sound and technologies on the island. As the debut season for club draws ever closer, Hï Ibiza today announces that Armin van Buuren will join its growing roster of residents with his new Wednesday night party U R, running for 13 weeks this summer, from 21st June to 13th September.

For more than two decades, Armin van Buuren has been a global ambassador for trance, and is widely recognised as one of the biggest DJs in the world, placing an incredible five times in the number one position of the critically acclaimed DJ Mag Top 100 poll, not to mention being voted the best trance DJ in the world at the International Dance Music Awards and the DJ Awards. The Armada label head continues to sell out stadiums and arenas around the globe with his Armin Only and A State of Trance tours as well as playing countless top festivals and nightclubs every year with a relentless tour schedule.

The GRAMMY-nominated artist is also no stranger to the White Isle, a place he loves more than anywhere else in the world. He’s held numerous residencies there over the past 12 years, including for his highly successful A State Of Trance party at Ushuaïa Ibiza in 2014 and 2015 where he captivated clubbers each week with his seamless and inspired selections. It’s with this same passion for Ibiza and ability to transcend boundaries between his music and the audience that he now brings to U R at Hï Ibiza, the concept of which will blend the beauty and spirituality the island is so well known for.

As the sun slowly fades away in the horizon of the sea, the skies transform from bright blue into a soft warm orange atmosphere. You are overwhelmed by the colour. Ibiza is pure energy and that reflects everywhere. Directed by a glimpse of the sun, you dive into your subconscious and you become one with your surroundings. The island embraces like a goddess and she makes you full of pure colourful energy that moment gives you fulfilment and makes you one with the island.

Armin will be joined by an array of big name guest DJs on this exciting new journey – watch this space for a lineup announcement coming soon!

“I’m looking forward to bringing my new concept U R to Hï Ibiza this summer. Ibiza is my favourite place in the world and I'm super excited to build a completely new home for myself. After being a resident for more than 12 years, it feels great to have this new challenge in a brand new club!” – Armin van Buuren

Book your place at U R this summer at www.hiibiza.com.