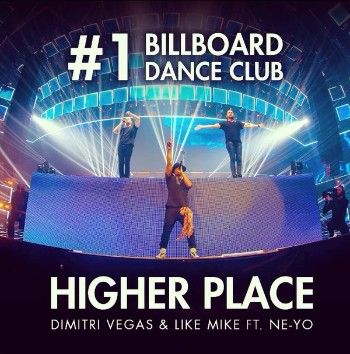 Dimitri Vegas & Like Mike, who were named #1 on DJ Magazine’s globally renowned poll of the Top 100 DJs for 2015, kick off the New Year at the #1 spot on Billboard Magazine’s Dance Chart with their international smash “Higher Place” feat. Ne-Yo.

“Higher Place” has become an undeniable sensation around the globe. Uniting Dimitri Vegas & Like Mike’s distinctly progressive modern house production with a fusion of Like Mike’s vocals and Ne-Yo’s instantly recognizable voice, the track’s music video has racked up over 10 million YouTube/VEVO views and counting to date. Worldwide, its cumulative Spotify streams already exceed 15 million-plus. It holds the distinction of being the “Most Shazammed Track” at both Tomorrowland and Creamfields this year. “Higher Place” is the first release from Dimitri Vegas & Like Mike’s newly minted relationship with Motown Records, who plan to take the track to pop and rhythm radio later this month.

The trailblazing brothers have solidified themselves as one of EDM’s most in-demand live acts, reaching #1 on DJ Mag’s highly coveted Top 100 DJs List, building an audience of over 7 million Facebook “likes”, scoring 10 Beatport number ones, and lighting up main stages of festivals like Tomorrowland, EDC Las Vegas, Creamfields and many more.

On December 17, 18, and 19, the brothers played three sold-out nights at the Sportpaleis Arena in Antwerp with their new production ‘Bringing The Madness 3.0,’ and with fans flying in from all over the world, the brothers delivered an audio and visual feast in front of 60,000 fans throughout the weekend’s proceedings. And in Salvador Brazil, they shook the very foundations of the city on New Year’s Eve celebrating with over 535,000 fans that came to party with the masters.

In the course of their illustrious career so far, brotherly duo Dimitri Vegas & Like Mike have scored 10 #1 Beatport hits and multiple iTunes number ones. They earned the title of “Main Stage Residents” at the global Tomorrowland festival in Belgium, USA (TomorrowWorld), and Brazil. They’ve hosted residencies at both Hakkasan in Las Vegas and Amnesia in Ibiza. Meanwhile, the video for their 2015 smash “The Hum” [vs. Ummet Ozcan] starred Charlie Sheen and Jean-Claude Van Damme and is closing in on 31 million views.

Amongst many accolades, Dimitri Vegas & Like Mike received the 2014 Beatport Award for the “Artist of the Year”, while the worldwide club hit “Mammoth” achieved “Track of the Year”. They also garnered “Best Artist (Group)” and “Best European DJ” at the 29th Annual International Dance Music Awards (IDMAs). They’ve also been tapped for collaborations with everybody from Steve Aoki to Steve Angello to Swedish House Mafia to Diplo to Tiësto, and more.