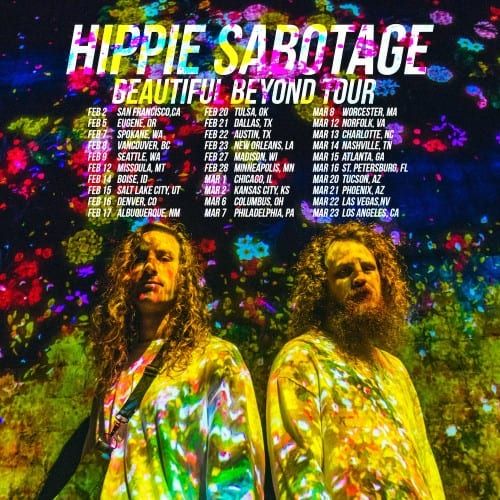 Fresh off the back of their widely successful ‘Lost California’ tour, chillwave meets trap duo Hippie Sabotage have announced their 2019 tour, ‘The Beautiful Beyond’, with the sibling producers set to head on a mammoth 30-date schedule across North America.

Composed of brothers Kevin and Jeff Saurer, the California-bred musicians will hit the road with support from Sebastian Paul, whose Trojan Horse EP was released via Mad Decent earlier this summer. Kicking things off on February 2nd, 2019 at The Warfield in San Francisco, ‘The Beautiful Beyond’ tour then continues through the Pacific Northwest with stops on the East Coast, culminating in a final show at the Hollywood Palladium in Los Angeles on March 23, 2019.

After a massive festival run this year playing the likes of Lollapalooza, Bonnaroo, HARD, and Electric Zoo, Hippie Sabotage have delivered fans a steady stream of new music including the buzzy “FADING INTO FOG” and the highly acclaimed flip of Billie Eilish and Khalid’s  “Lovely”. The duo recently dove back into their hip-hop roots, earning credits on Denzel Curry’s latest album TA1300 with “MAD I GOT IT”.

The announcement precedes their forthcoming Christmas tour, with the Hippies playing an intimate show in San Diego on December 20th, followed by a double-header in Orange County on December 21st and 22nd. Excitement for Hippie Sabotage’s live shows continue to grow as they evolve their production with genre-bending releases and eye-catching visuals.

‘The Beautiful Beyond’ Tour Dates: