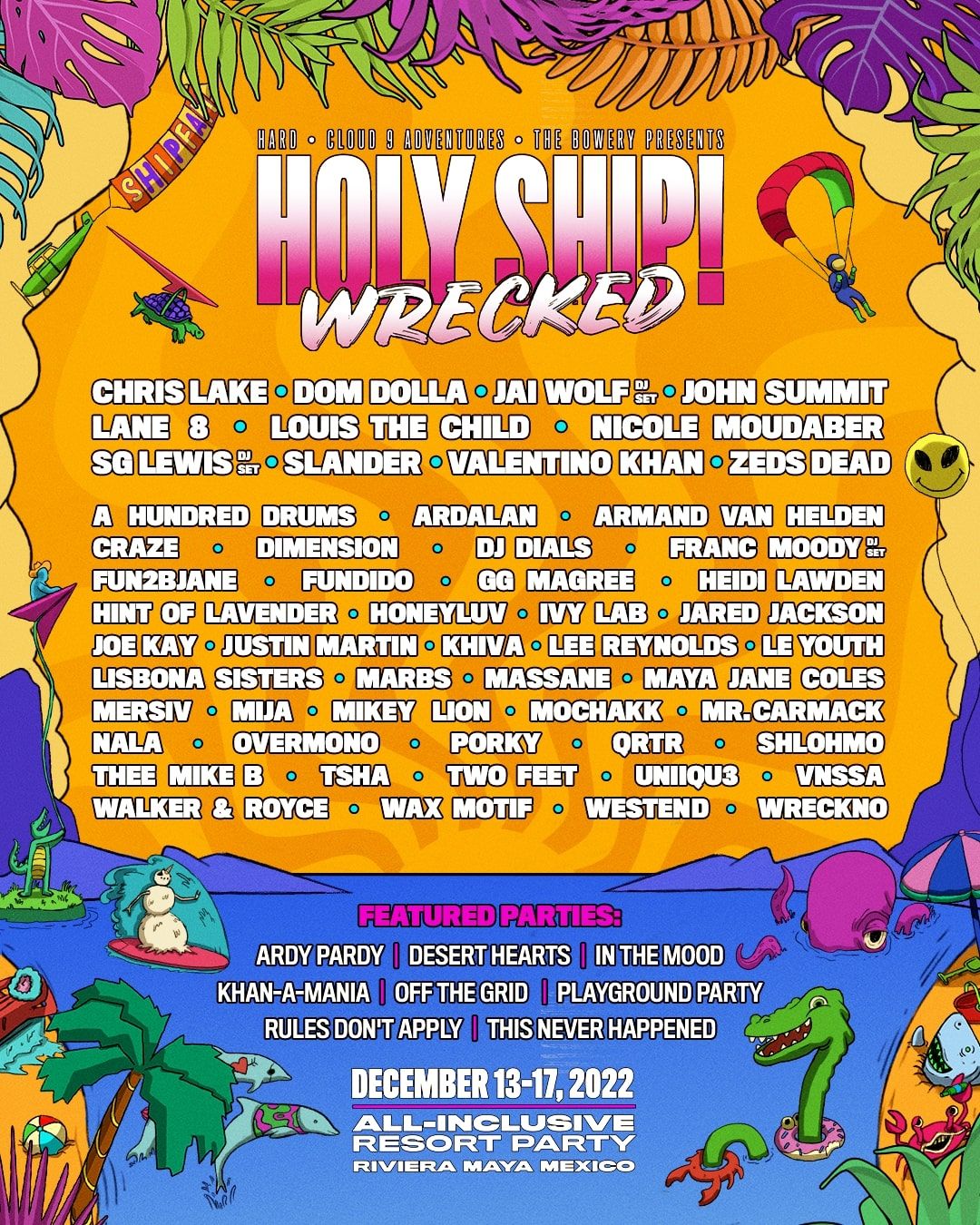 Holy Ship! Wrecked, one of the most coveted parties on the planet, has announced the music scheduling, sunrise set with Justin Martin, and party takeover set times ahead of its 2022 edition at Hard Rock Riviera Maya, Mexico from December 13-17. This includes day-by-day programming for the Main Stage, Beach Stage, Pool Stage, Sunrise Stage, Tropic Stage, and Wrecked Stage.

Those in the know will tell you that Holy Ship!’s party takeovers remain one of the most exciting parts of the event’s curation. This year’s branded party takeovers include Ardalan’s Ardy Pardy, the always outrageous Desert Hearts, Nicole Moudaber’s In the Mood, Valentino’s Khan-A-Mania, John Summit’s Off the Grid, Louis The Child’s Playground Party, Walker & Royce’s Rules Don’t Apply, and Lane 8’s This Never Happened.

Justin Martin has also been announced as the act for the iconic two-and-a-half-hour Sunrise Set, a cornerstone of the Holy Ship! experience for fans year after year at the Sunrise Stage. This announcement comes in addition to newly added activities including the Super Smash Bros. Tournament with SLANDER, Get Wrecked Games hosted by Wax Motif & Westend, UNIIQU3’s Jersey Club Fitness Class, Balcony Decorating Contest, unLimited Too Lounge, OG Party, and Yoga.

Flowing from pool to beach stages during the day and club to mainstage environments at night, Holy Ship! Wrecked’s newly released set times allow fans to plot their journey through the Riviera Maya excursion of a lifetime with surprises around every corner.

Day one welcomes fans with a Zeds Dead headlining set along with party takeovers from Nicole Moudaber’s In The Mood and Walker & Royce’s Rules Don’t Apply. Ring in day two with the Big Beach Blowout or Valentino’s Khan-A-Mania and carry the vibes into the night with a Chris Lake headlining set and special In The Jungle Drum & Bass All Night sets in line with day two’s Wildin’ Out: All Things Jungle theme. Keep things going with daytime parties on day three led by tech house sensations Dom Dolla b2b John Summit at the Beach Stage and Mersiv at the Pool Stage, with Louis The Child playing a mainstage headlining set, various parties like Ardalan’s Ardy Pardy and Bass Down, Hands Up dubstep party, and Justin Martin’s sunrise set to end the night in triumph. Wrap day four with Louis The Child’s Playground takeover and So Fresh So Clean hip-hop pool parties during the day, SLANDER taking things into the late night on mainstage, and a slew of parties and takeovers including Desert Hearts, Lane 8’s This Never Happened, John Summit’s Off The Grid, and an SG Lewis-led Disco Inferno Party.

Resort amenities will take their headlining slot too – with nine all-inclusive restaurants, complimentary craft cocktail & tequila bars, twenty-four-hour complimentary room service, waterpark, zipline, extreme sports, and fitness center, making this a truly worry-free, action-packed experience. Those looking for R&R can spend the day being pampered at the Spa and Salon or kicking back in their own private hot tub and balcony before getting back out on the dancefloor.

The idyllic locale, massive lineup, and Shipfam community make Holy Ship! one of the best events in the world. Stepping into this wild and wonderful world of mischief makers and wildcards grants unprecedented access to a global network of warmhearted party-starters. Making no distinction between veteran or virgin, fan or artist, Shipfam unites to break down social boundaries and bring the ultimate feel-good vibe to the sunny shores of Mexico.

Holy Ship! Wrecked is brought to you by Beats at Sea, a coast-to-coast partnership between industry pillars HARD/Insomniac, Cloud 9 Adventures, and The Bowery Presents – founders of the Holy Ship! brand circa 2011. For more info and to secure your cabin visit: www.holyship.com. 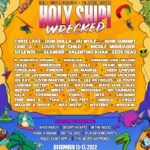