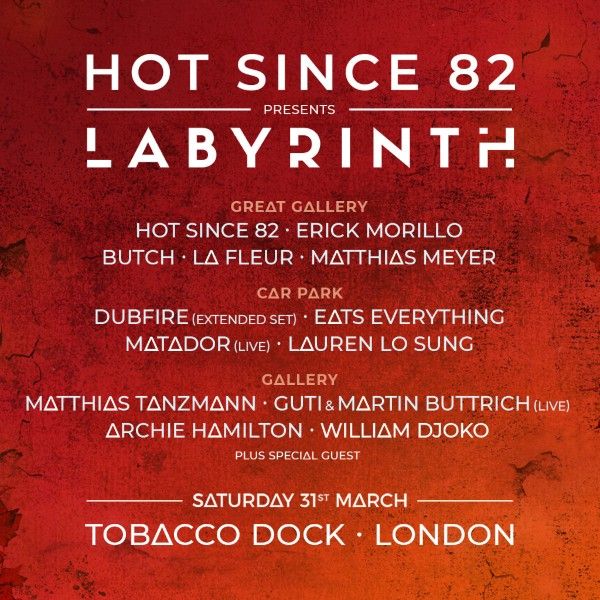 After an incendiary debut year in Ibiza, Hot Since 82 will now bring his Labyrinth party concept to Tobacco Dock London for a special one off show. The 21 week residency saw Daley Padley (Hot Since 82) this summer transform Pacha into an ancient mythical jungle with a party truly inspired by colour, fun and great underground music. Blending exciting new talent with some of the Balearic old guard. This March Hot Since 82 will bring the Labyrinth experience to the UK for the first time, indulging London with a taste of Ibiza.

Hot Since 82, has revealed the final names to be joining him will be Erick Morillo, Matthias Tanzmann, Archie Hamilton and La Fleur. Completing a lineup that will explore many twisting turns of house and techno.

"Legend" is a title that gets thrown around a lot. But our next act is certainly worthy of holding legendary status. Erick Morillo has a storied career in dance music. Many of today's top DJs would list him as an idol. Hot Since 82 spent many formative summer nights on a Morillo dancefloor. So when Morilloreturned to his former stomping ground in 2017 to play at Labyrinth, it was symbolic in more ways than one. Still enthralling a whole new generation of clubbers, this will mark his debut appearance at Tobacco Dock.
Matthias Tanzmann released Daley’s huge Evolve or Die on his Moonharbour imprint, and then remixed the track. Then Daley returned the favour by giving his own interpretation to Tanzmann’s Tarmind. So you could say this is a relationship that has already borne fruit. Now HS82 invites Tanzmann to Tobacco Dock for the first time.

Archie Hamilton has firmly established himself as one of the scene’s most sought-after young artists. 2015 was a breakthrough year for Archie, with his hit tracks Mind Blank and Troublemaker propelling him into the limelight. The summer saw the launch of a new project with fellow FUSE London residentRossko, ‘Arkityp’ hosting 5 events across the summer season at Ibiza’s Underground Club.

Don’t even think about putting La Fleur into a box. For a start, she’s had too many twists and turns in her career to be pigeonholed. She joins the previously announced Matthias Meyer as our Ibizan residents joining us in London, and completes an eclectic array of house and techno on 31st March. No longer a breakthrough artist, La Fleur has well and truly arrived.

VIP tickets include:
– Fast track entry via a separate VIP / guestlist queue
(you MUST enter via this queue to pick up your wristband)