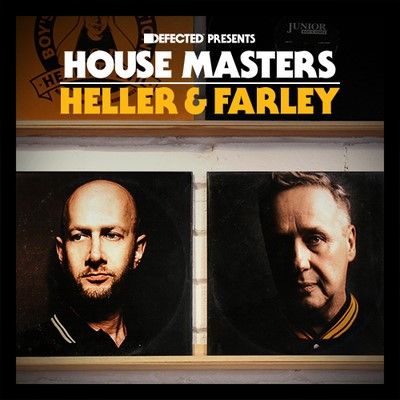 Defected presents House Masters Heller & Farley is a new 30 track collection that covers all aspects of their long and illustrious careers in the studio, from remixing some of the biggest bands in the world to producing underground sleeper hits that would prove pivotal in the population and development of house music in the UK.

Trace the roots of house music in the UK and you’ll find Pete Heller & Terry Farley at its source. Shoom, Future, Spectrum, The Trip: they were there.  Omnipresent at those early, exploratory and revelatory trips to Amnesia, Boys Own parties out in the sticks, expeditions to The Hacienda, Basics and Cream, the early years of Ministry of Sound and transatlantic ventures to worship at the altar of Junior at The Sound Factory.

Heller & Farley productions are steeped in the sights and sounds of these experiences, the most influential of nightclubbing moments from the last 25 years. Their music is heritage, quality down to the bone: a bastion of the UK sound that has influenced and inspired subsequent producers all over the world.

Heller has been a music obsessive all his life. Early on he was into bands like The Clash, Psychedelic Furs and The Jam as well as Madness. Then came the house music movement that would define his career.  From DJing and putting on his own events in Manchester he soon managed to work his way into the in-crowd and played some key sets at Shoom!. Here he met Terry Farley, a similarly fanatical music fan, giving birth to a production partnership that would, under various guises, create some of the most seminal house records ever cut to wax.

“For Pete and I to be included in the House Masters series is such a honour. Looking at those who have already been included, icons like Frankie, MAW and MURK it's really a big deal.

“The track listing itself is fantastic, it’s a wide scope of what we are about and where we were at. We wanted to include a mix of the underground stuff like the Robert Owens mixes and the big 'pop' acts like New Order and U2 and some of our dubs that the likes of Junior Vasquez, Tony Humphries and Frankie Knuckles first picked up on and 'broke' us in New York. We're really proud of this and proud to have contributed to house music’s cultural foundations.”

As Fire Island, the duo took Simply Red’s funk-laced ballad ‘Money’s To Tight To Mention’ and transformed it into a 10-minute percussive house epic, with hazy Rhodes chords and a wandering bassline twisting their way to the euphoric payoff at its centre. Similarly impressive reimaginings of U2, New Order and Happy Mondays kept them firmly in the limelight throughout the 90s.

But it’s for their own productions, those club anthems that are still hammered to this day, that they are held in such high esteem. Whether as Fire Island 'If You Should Need A Friend', 'In Your Bones'), Roach Motel ('The Night') or under their own name as Heller ‘N’ Farley Project, their influence cannot be overstated.

All the aforementioned records are included on House Masters Heller & Farley, along with a brand new version of perhaps their best-known record ‘Ultra Flava’, exclusive to this compilation.