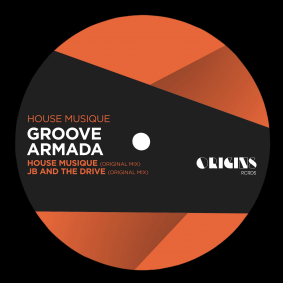 With a career stretching over two decades, multiple top 10 singles and albums in the process, Andy Cato and Tom Findlay, aka Groove Armada, are undeniably one of the most influential and best selling electronic acts of the modern era. With recent releases on the likes of Snatch!, VIVa MUSiC and W&O Street Tracks, the pairing have found themselves equally at home playing on international festival stages including Glastonbury, Lovebox and Extrema Outdoor as they have within dance music institutions such as fabric, DC-10, The Warehouse Project and Ushuaïa, where they have made regular appearances for the venue’s illustrious event ANTS throughout the 2018 Ibiza season. Here we see them make their label debut on Butler’s flourishing Origins Rcrds to drop their two-track EP entitled ‘House Musique’ to round out summer.

‘House Musique’ opens proceedings in style, snaking between old school house percussion breaks and resonant chord-driven melodies to reveal a bright and infectious title cut. On the flip, ‘JB And The Drive’ strips things back and shifts the focus towards slick percussion arrangements, shimmering hats and rich vocal hooks, unveiling a heads down, hands up groover that is set to become a favourite of many in the months ahead.