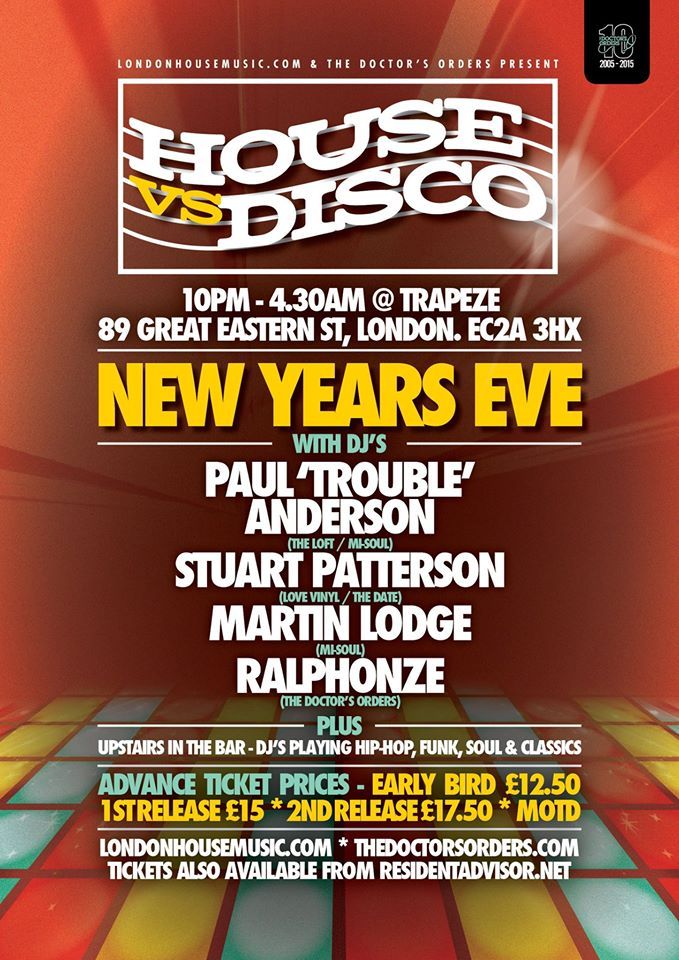 Do you love house and disco but hate having to go between two rooms at a club to get your fix? Worry no more, two London party institutions The Doctor's Orders and LondonHouseMusic have come together for the ultimate New Years celebration.

Disco classics and real house favourites rub shoulders on the dancefloor (with the big sound of our basement) courtesy of three djs who will move seamlessly between your beloved house and disco. We'll be sprinkling NYE magic dust in the basement as we want to make this a PARTY fit to a bring a new year in.

The Doctor’s Orders have been hosting some of London’s greatest Hip-Hop parties for the last ten years. Often dipping in and out of House classics and Disco anthems (and always getting such a positive reaction), they have decided to distil that for a full night of ‘House vs Disco’. Expect floor-filling Disco, timeless House and bridging the gap between the two with all manor of exclusive edits.

Londonhousemusic.com have been involved in some of London's best house music events of the past two decades including the legendary Faith parties and more recently The Date parties which have seen Kerri Chandler. Danny Krivit, Tony Humphries, Frankie Knuckes (sadly one of his last ever sets), Spen + Karizma and Timmy Regisford all invited to play in London in the past two years.

Paul ‘Trouble’ Anderson is one of the most respected party DJs with the perfect clubbing attitude. With a wealth of experience spanning back to the 1970s. Paul’s been a huge part of many landmarks in clubbing history including being one of the founders of Kiss FM, Camden’s legendary ‘The Loft’, as well as headlining huge warehouse parties and a residency in Italy.

Alongside him will be Stuart Patterson, a name always welcomed by any true House, Disco and dance music heads. Stuart’s experience with DJing, club programming, promoting and more make him a true heavyweight of the scene and the industry.

Warming things up at the latest of literally thousands of great nights to have graced this Shoreditch basement is Martin Lodge and Ralphonze.