Steve Aoki - How Else (Remixes) 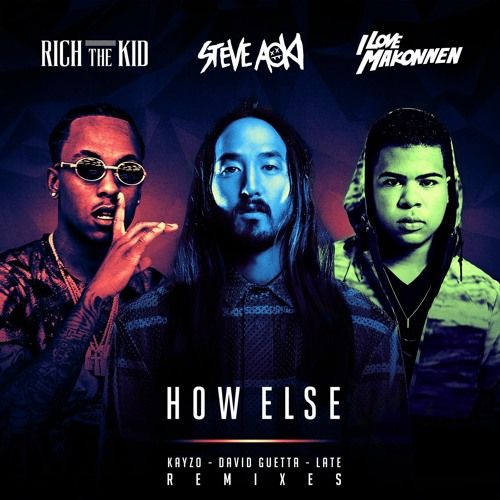 Steve Aoki - How Else (Remixes)

Following his remix of Blink-182’s “Bored To Death,” STEVE AOKI is back with more for dance floors everywhere. Today (September 16), Ultra Music/Dim Mak have made available a three-song remix package of AOKI, Rich The Kid and iLoveMakonnen’s “How Else.”  ETOnline premiered world-class producer/DJ David Guetta‘s remix which turns the low-down original into a major dance floor burner, while emerging LA-based producer Kayzo gets wild taking the track deeper across harder styles.

At the top of 2016, STEVE AOKI, Rich The Kid and iLoveMakonnen surprised the blogsphere with “How Else.”Taking  a new twist, the original track (released on June 29)-with its catchy ‘Whip It’ hook– struck a chord from the likes of The Fader, HipHopDX,Rap Radar and HotNewHipHop who wrote, “…it makes effective use of Makonnen yelling, ‘How else am I gon’ get it?’ Rich and Makonnen’s snappy trap punchlines go surprisingly well alongside Aoki’s wonky bass drops, and ‘How Else’ should have some crossover appeal come festival season.” Elsewhere, Complex it as”…a mind-bending electronic experience that actually sounds great with Makonnen and Rich’s verses.”

Check out the video featuring AOKI, Rich The Kid and iLoveMakonnen performing and partying during the Dim Mak 20th  Anniversary party at this past spring’s Miami Music Week here:
http://bit.ly/298x5WR

STEVE AOKI is a Grammy-nominated international producer/DJ, electronic dance music entrepreneur, and founder of the trendsetting record label, events/lifestyle company and apparel line Dim Mak. Since launching in 1996, Dim Mak has broken bands such as Bloc Party, The Bloody Beetroots, Klaxons, and The Gossip through deftly marketed single and full-length releases and now has nearly 500 releases to date. As a solo artist, AOKI has become a force of nature averaging over 250 tour dates per year. AOKI’s second artist album NEON FUTURE I, was released September 30, 2014 via Dim Mak/Ultra Music and features his Gold certified single “Delirious (Boneless)” with Chris Lake and Tujamo featuring Kid Ink, “Born To Get Wild” featuring will.i.am and “Rage The Night Away” featuring Waka Flocka Flame. The second part of his Neon Future album, NEON FUTURE II, was released on May 12, 2015 and features collaborations with Linkin Park, Matthew Koma, Snoop Lion, Rivers Cuomo and NERVO, plus a very special appearance by creative genius J.J. Abrams who voices the outro to close the album.  AOKI’s other current tracks include “How Else” featuring Rich The Kid and iLoveMakonnen, “Back 2 U” with Boehm featuring WALK THE MOON–which is smashing on the streaming front with over a million Spotify plays per week since its release in May and has been added to many Top 40 radio stations including Y100 in Miami-plus “Can’t Go Home” with Felix Jaehn featuring Adam Lambert.   Steve Aoki is also the featured subject of the Netflix Originals documentary I’ll Sleep When I’m Dead, out now.